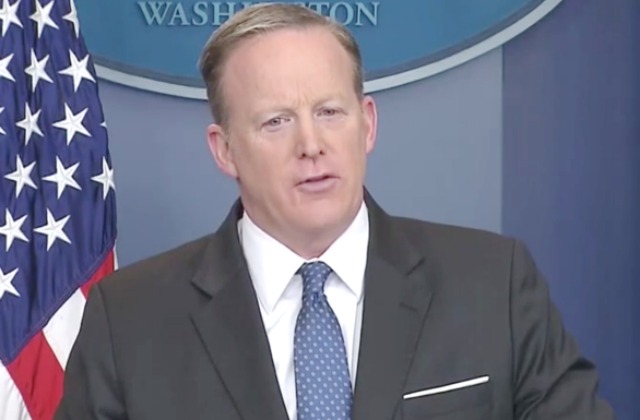 President Donald Trump has no intentions of firing Sean Spicer as his White House press secretary.

An article posted today by the Washington Post   explores Trump’s relationship with cable news media, and also how the former reality-TV host looks at TV ratings as a measurement on how his administration officials are performing. WaPo reports that during a lunch last month, Trump  said that he looked at the viewership for Spicer’s daily press briefings, and decided to keep Spicer on board.

“I’m not firing Sean Spicer,” Trump said, according to sources. “That guy gets great ratings. Everyone tunes in.”

Ever since he became press secretary, Spicer has issued several controversial statements that have resulted in blowback on multiple occasions. Recently, various individuals demanded that Spicer be fired after he seemed to put Adolf Hitler in a positive light while he was talking about Syria’s Bashar al-Assad.

The article goes on to examine the ways in which news coverage factors into Trump’s political thinking and his input on Twitter. Advisers said that TV coverage has prompted Trump’s interest in various policy developments, and various officials are being encouraged to go on TV whenever they want to make an impact on an issue and attract the president’s attention.

“President Trump is someone who comes to the White House with a sophisticated understanding of how to communicate, the power of television, the power of imagery, the power of message, and how message, messenger and delivery all work together.”

The fact that Trump is obsessed with television isn’t necessarily news to anyone who’s turned on the TV in the past few years, but the details in this article are terrific. For example, he mostly watches Fox News, Fox Business and CNBC in the morning. During the campaign he once pointed at a television on his plane that featured Hillary Clinton and point finger at the TV and scolding: “She’s lying! She’s lying!”’ He is also reported to enjoy “hate-watching” cable news shows that are very critical of him (which most certainly includes  CNN Tonight with Don Lemon).