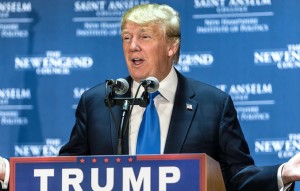 Donald Trump loves to remind people that he is a “winner” and that almost anyone who goes up against him is eventually deemed to be a “loser.” Now that he has convincingly won the first primary and officially taken the GOP nominating process by the throat, it is a good time to take a look at who the media “winners” and “losers” are in the wake of Trump’s remarkable victory.

In a rational world, this stunning development would be a career-ender for many high-profile people who didn’t see it coming despite massive evidence indicating that it would. However, as someone who has been right many times only to suffer career damage from it, I fully realize, as Trump’s victory itself illustrates, we don’t live in a universe where rationality usually has much power or credibility or any real significance.

It is interesting to point out that, mostly by coincidence, I have had significant and direct interaction with everyone, including Trump himself (who I like personally, but do not believe is likely to beat Hillary Clinton), mentioned here and I am sure that I will be doing myself no favors by calling them out with the truth.

First, here are the biggest “losers.”

Nate Silver. Back in November, this liberal media darling and alleged prediction guru told the world that Trump had no real chance at the GOP nomination and that his poll numbers were nothing to be concerned about because they were likely to fade before any votes were cast. I wrote a response on this website explaining exactly why he was dead wrong.

As it turns out, on the most significant question which his industry has ever faced (Is Donald Trump for real?), Silver was not just mistaken, but he was catastrophically and embarrassingly incorrect. Less than a week ago he was still laughably claiming that Trump had a 38% chance of losing New Hampshire and he was “looking like Pat Buchanan” (who once won New Hampshire by one point and never won again).

The irony of a guy who became famous by using/trusting the accuracy of other people’s polling being utterly exposed because he didn’t believe the polling on Trump (and couldn’t see the obvious differences between Trump and past GOP frontrunners who faded fast) is obviously rich.

How Silver could ever be taken seriously again as a political predictor is beyond my ability to grasp. This failure is the equivalent of an NBA analyst prognosticating that the Golden State Warriors wouldn’t win a game this year. Hopefully at least some in the moronic media which sustains the Silver myth will finally realize that he spends far more time with a calculator than speaking to any actual voters (especially conservatives).

Frank Luntz. The guy who may be less reliable than Silver (he claims to be a conservative but in 2008 enthusiastically took part in a documentary about helping Hollywood liberals hone their political message and made numerous positive statements about Barack Obama) held one of his notorious focus groups after the first GOP debate. Luntz unequivocally declared that Trump was dead, gone and finished. Trump’s poll numbers only got better from there.

The reality is that voters react and respond to debates completely differently when put in a large group and then televised than they do in the real world. This is obvious to anyone not named Frank Luntz or the idiots at Fox News who continue to give airtime to the pointless charades that are these silly focus groups. It is also clear that modern debates (largely because they aren’t really debates at all) usually have remarkably little impact on voter preferences because people tend to see and hear only what they want to.

Rich Lowry & National Review. Lowry and his publication could not have gone out more on a limb against Trump than they did in their issue devoted to 22 writers condemning him. I hesitate to put them in the “loser” category because I think history will soon vindicate their stance, but clearly, in the short run, there could not be a greater illustration of the utter impotence of the pundit class than this one.

Lowry deserves to be singled out for his hilariously inaccurate and inappropriate analysis that Carly Fiorina had surgically removed Trump’s testicles after the second debate. Say what you want about him, but it is obvious that Trump’s balls are still very much intact.

Eric Erickson. Erickson made an interesting “bet” early in the process when he disinvited Trump to an event he was hosting after the first debate. It was obvious to me at the time that he did this because he thought it was a good career move. He got lots of publicity for standing up to the bully and also curried favor with Megyn Kelly and Fox News. I am sure he never thought Trump would end up winning New Hampshire and transform into the favorite to win the nomination (he actually picked him to finish third in Iowa).

Mike Murphy. Murphy runs the Jeb Bush Super PAC, but since he also does political commentary he belongs on this “media” list. It is hard to call him a total “loser” since he has undoubtedly pocketed a boatload of cash from wasting tens of millions of dollars to help take down Marco Rubio (who most of the donors who gave Murphy the money actually like). However, his disastrous Nate Silver-like underestimation of Trump and his decision to take out the candidate best suited to stop him (Rubio) will force history to look very poorly on Murphy. In exchange for his blood money, Murphy did almost nothing for his candidate and paved the way for Trump, the man he correctly says would be a disastrous candidate for the Republican Party in the general election.

Bill Kristol. Kristol, who has a Dick Morris-like record of bad prognostications, incorrectly predicted that the Republican Party would have a “Fall Fling” with Carly Fiorina (it was more like a coffee date). He has also been extremely dismissive of the Trump candidacy, numerous times erroneously tweeting #PeakTrump. He, like Silver, incorrectly forecasted that Trump would be exposed well before the voting began and has even promised to start a new conservative party if Trump were to somehow be the nominee. It looks like he may have quite a bit of work ahead of him.

Those both winning and losing…

Fox News. Like Murphy, it is difficult to call Fox News a “loser” when Trump has made them so much money in increased ratings over the past six months. However, Trump’s boycott of the final pre-Iowa debate was a shocking moment for the media entity which thinks its monopoly on conservative TV news gives it supreme power over any conservative.

For Trump to so blatantly give them the middle finger and for it to not negatively impact him beyond perhaps a few votes in Iowa, is like the mafia being unable to retaliate against a high-profile traitor. Fox News will never be feared quite the same way again and their real power, even on a Republican primary where they were presumed to be the king-maker, is now very much in question.

However, in the end Fox News will likely be a “winner” here, especially if the race goes all the way to the convention and they get their best July ratings in history.

Rush Limbaugh, Sean Hannity, & Mark Levin. While each of these talk radio giants is slightly different in how they have handled the Trump Phenomenon, they belong grouped together if only because they have a bit of an alliance. You can argue that they actually belong on the “winners” list because all three have played an instrumental role in Trump’s victory (though Levin effectively abandoned Trump for Cruz late in the process and Limbaugh has recently [and correctly] been favoring Rubio). There is zero doubt in my mind that if these three had not praised Trump (bizarrely and tellingly, none of these men paid millions for their opinions ever officially “endorses” a candidate in a GOP presidential race) at the beginning when conservatives were tying to decide whether to trust him, that Trump never even gets significant traction.

However, it is my very strong view that, in the end, these three talk radio legends will probably regret their role in allowing a very-beatable Hillary Clinton to be elected and that their legacies will be forever stained by this very likely outcome. When Hillary gets to replace up to three conservative justices on the U.S. Supreme Court I hope that these conservative icons will think fondly on the fleeting extra ratings points they got thanks to their Trump support in 2015. Of course, ironically, that will only lead to another ratings burst for them as most (though not all) of their fans will fail to connect their Trump flirtation to why the last vestiges of the Reagan Revolution are dismantled forever.

NEXT PAGE: Check out the winners here…