Dr. Laura Gets “Dr. Laura’d” While Shirley Sherrod Sides With NAACP Against Breitbart

Dr. Laura Gets “Dr. Laura’d” While Shirley Sherrod Sides With NAACP Against Breitbart 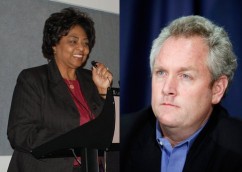 Yesterday, the NAACP released a biting statement, excoriating a prominent member of the right wing for a deeply offensive act. Later in the evening, Dr. Laura Schlessinger announced that she wouldn’t seek to have the contract for her radio show renewed at the end of the year.

But the NAACP’s statement wasn’t about Dr. Laura – it was from Shirley Sherrod. In a clear demonstration that she sees herself and the NAACP allied in a fight against a common enemy – and in a remarkable bit of redemption for NAACP head Ben Jealous – Sherrod blasted Andrew Breitbart and Fox News for their roles in last month’s kerfuffle. Calling Breitbart’s clip “heavily edited” and “intentionally deceptive” she notes that she won’t “yield because some Tea Party agitator sat at his computer and turned everything I said upside down and inside out.”

The NAACP was, in fact, not at the forefront of calls for sponsors to drop Dr. Laura – that leadership was position held primarily by Media Matters. Although Dr. Laura’s offense was to repeatedly spout the n-word and demean the political choices of the African-American community, it was the progressive community broadly that held her to account. This despite Dr. Laura herself invoking the name of the organization, famously suggesting to the black caller in the incident that the caller was “taking things out of context” and exclaiming, “Don’t NAACP me!” The irony of referring to taking words out of context as “NAACPing” – and not “Breitbarting” – was lost on the good doctor.

In her resignation, Dr. Laura sputtered and fumed about “special interests” who somehow revoked her First Amendment right to say whatever she wanted. Or, in her words to Larry King, she no longer has “the right to say what she needs to say.” You know, like the n-word.

Dr. Laura’s comments were tone-deaf and out of touch, the result of a media environment that makes it difficult to pause, to temper, to reflect. Shirley Sherrod was caught in that same environment, the victim of the NAACP’s difficult choice in a swirling news cycle: act immediately with the information at hand, or risk being pilloried for allowed a purported racist to go unchallenged. It was a situation in which the NAACP couldn’t not act.

In the case of Dr. Laura, the NAACP didn’t need to act. Dr. Laura didn’t get “NAACP’d.” She got “modern American cultured.” She was unable to articulate why her comments were wrong or to admit her mistake. That her announcement to Larry King placed the blame on everyone except Dr. Laura means that her decision to leave the air is the right one – she is no longer able to comment effectively on the world in which she lives, because she doesn’t understand it. In a way, I guess she did get NAACP’d – in the sense that she was the victim of society that increasingly understands and agrees what that organization strives for.