Elizabeth Warren Fires Back at Obama: If You Want a Trade Deal, ‘Let Us See It’ 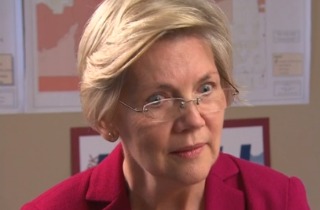 Senator Elizabeth Warren (D-MA) has been one of the loudest opponents to the Obama administration’s proposed Trans-Pacific Partnership trade deal, which earned her a presidential rebuke on Hardball last night. Warren fired back on her website this morning, calling for the White House to release details of the trade deal before Congress grants Obama fast track authority.

“If the American people would be opposed to a trade agreement if they saw it, then that agreement should not become the law of the United States,” she wrote Wednesday.

“If most of the trade deal is good for the American economy, but there’s a provision hidden in the fine print that could help multinational corporations ship American jobs overseas or allow for watering down of environmental or labor rules, fast track would mean that Congress couldn’t write an amendment to fix it,” Warren wrote. “Before we sign on to rush through a deal like that – no amendments, no delays, no ability to block a bad bill – the American people should get to see what’s in it.”

The battle of the trade deal, which is supported by the administration and many Republicans but opposed by labor and environmental groups, threatens to pit flanks of the Democratic Party against each other ahead of election season. Liberals disdain trade deals, arguing they gut the U.S. labor force by sending jobs overseas.

“I love Elizabeth. We’re allies on a whole host of issues,” Obama told Matthews in an interview last night. “But she’s wrong on this.”