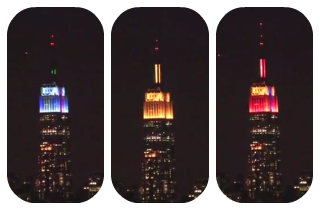 In a press release, the landmark skyscraper announced that the Philips Color Kinetic lighting program allows “customized light capabilities from a palette of over 16 million colors in limitless combinations along with effects previously not possible such as ripples, cross-fades, sparkles, chasers, sweeps, strobes and bursts. In addition to greater control and management of the lighting, the new computerized system will deliver superior light and vibrancy levels in real-time, unlike the previous floodlights.”

In other words, this is pretty cool stuff.

Normally the building’s top section is illuminated with colors that indicate a particular event or person — i.e., on St. Patrick’s Day, you’ll see green and white; on Christmas, red and green; and when the Yankees are in the World Series, you’ll see blue and white. For election night, the building was famously used to display real-time election results. But this new light show uses those 16 million colors to create a truly mesmerizing light show.

The inaugural light show was synchronized to Alicia Keys’ recent hit “Girl On Fire” as well as the more obvious choice of her mega-hit “Empire State of Mind.”

“The Empire State Building has always been a symbol of what’s possible in New York,” Keys said of the show. “And all the dreams that can come true in this city that never sleeps. I’m so excited to unveil the new tower lights that are going to illuminate the city below like never before—shining bright with inspiration. As a proud New Yorker, I’m so honored and humbled to be a little part of its history.”