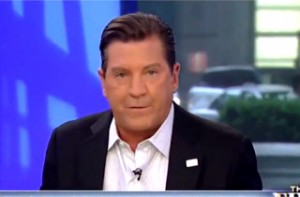 Fox’s Eric Bolling compared Donald Trump’s incendiary remarks attempting to discredit the judge in the Trump University’s case based on his ethnicity to comments Supreme Court Justice Sonia Sotomayor made 15 years ago calling for more diversity in courtrooms.

Bolling seemed to suggest that anyone Hillary Clinton would nominate to the Supreme Court would apply exactly the same logic in their deliberations that Trump employed when he issued statements that Judge Gonzalo Curiel was not qualified. A Democrat appointing Justice to the Supreme Court would result in “more Sotomayors who will use everything you’re complaining about Trump saying in action,” he said.

Sotomayor made the comments Bolling quoted at a 2001 speech she gave at University of California, Berkeley, while still an appeals court judge. The remarks became widely broadcasted during her confirmation hearings in 2009.  At no point in the speech did she say or suggest that the “merits of the case” did not matter, as Bolling glossed.

It has become a familiar talking point to compare Sotomayor’s 15-year-old call for more diversity in courtrooms with Trump’s repeatedly referring to Judge Curiel’s Mexican heritage as disqualifying.

Sean Hannity said on his radio show Monday, “Isn’t there some similarity here in assuming that Sonia Sotomayor’s comments […] suggest that the background, the heritage of somebody might influence how they do things? That’s what liberals believe.”

National Review‘s Victor David Hanson accused the media of “journalism bias” in a post entitled “Journalism, R.I.P.” published Monday. Journalists were hypocrites, he wrote, for failing to condemn Sotomayor for having “made the term ‘Latina’ a standard referent in her speeches.” Sotomayor got a pass for her “wise Latina woman” comment, which he said, was a “racist and sexist declaration.”

Speaking to CBS News in 2009, some eight years after she made the speech, Sotomayor said, “I want to state upfront, unequivocally and without doubt: I do not believe that any ethnic, racial or gender group has an advantage in sound judging. I do believe every person has an equal opportunity to be a good and wise judge, regardless of their background or life experience.”