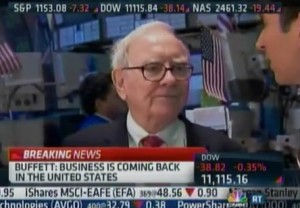 On his YouTube channel, and in a tweet from communications director Brad Dayspring, Rep. Eric Cantor (R-VA) is pushing a CNBC clip that he claims shows that “Warren Buffet Seems To Disagree With President Obama’s ‘Buffet (sic) Rule’,” and that he “refuses to endorse the President’s Jobs Bill.”

Unfortunately for Cantor, there’s no “there” there, as Buffett tells Andrew Ross Sorkin that he hasn’t seen all of the details of the President’s plan, so he doesn’t really know if he agrees with all of it. Stop the presses!

Buffett has become a populist poster boy for his suggestion that very wealthy individuals should pay their fair share of taxes, and as he tells Ross Sorkin, gave his permission for the Obama administration to use his name for their so-called “Buffett Rule” (not to be confused with the “buffet rule” that Cantor seems to refer to, which is “Don’t sneeze on the food, and no double-dipping”).

“Gene Sperling called and said, ‘Can we use your name,’ and I said yes,” Buffett tells Ross Sorkin.

Asked whether he’s happy with the way it’s being used, Buffett said, “I don’t know what their program will be. My program would be on the very high incomes that are taxed very low.”

Ross Sorkin asked, “Does that mean that you disagree with the President’s new jobs proposal, which would be paid for by raising taxes on households with incomes of over $250,000?”

“That’s another program that I won’t be discussing,” adding later that “I will look at the overall plan that gets submitted to Congress…and decide, net, do I like it, or do I not like it? There’s no question there’ll be parts I disagree with.”

Buffett’s “refusal” to endorse the plan is clearly based on the fact that he doesn’t know the whole plan. “Are you a supporter of his jobs program right now?” Ross Sorkin asks, to which Buffett replies, “I am a supporter of the action he’s trying to get the Congress to join him in taking…I haven’t looked at all of the details.”

Characterizing Buffett’s very supportive statements as a “refusal to endorse,” then, is about as fair as saying, “Eric Cantor Opposes Reading Bills Before Deciding On Them!”