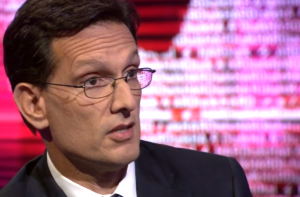 Former House Majority Leader Eric Cantor, once “a pillar of the party establishment,” spoke with Stephen Sackur on BBC’s Hardtalk last week about the “misconceptions” surrounding “what’s happening now within the Republican conference on Capitol Hill.”

Cantor, who lost his seat in a shocking upset in 2014, attributed his downfall to the “so-called Tea Party” — the “very small but very vocal minority” in the Republican party. “Initially we were thrust into the majority, and from whip I became the majority leader, because we were elected to stop Barack Obama and what he was trying to do, And that was the initial victory, and people were elated,” Cantor said.

“…Somewhere along the way, the expectation shifted from blocking Barack Obama to trying to reverse what he had done and enact a conservative vision, all the while the President was still in office.” Cantor said, chalking up his defeat to the Tea Party’s “unreasonable” expectations. “I wouldn’t even call them conservative, they’re more radical populists at this point,” Cantor added.

Cantor said there’s “no question” the Republican party looks dysfunctional, “because you have this very vocal minority that is able to seize opportunities to use procedural tools or to sometimes work with the Democrats to disrupt the process from working the way it usually does.”

Cantor said Republican presidential candidate Donald Trump is “absolutely not” a credible nominee for the Republican party, adding that the candidate “has no substance.”

When asked about Trump’s harsh comments towards Hispanics and other minority groups, Canter noted, “I have said it’s divisive, and I don’t think it’s befitting of someone with the proper temperament to be president of the US.”

Pressed by Sackur about Trump’s success, Cantor suggested the 2016 campaign is still in its “early silly season,” and expressed hope that voters will reflect this in the polls. “I would not say Donald Trump is reflective of the republican party,” Cantor said, “he’s not a conservative.”

“Real conservatives are conservatives who believe in progress through incremental progress and a temperament that is befitting of a conservative. Not a revolutionary, and that’s really the foundation upon which the U.S. was built and the Constitution that we have, but I do think as we get closer you’ll see a lot more seriousness on the part of the voters,” Canter said.