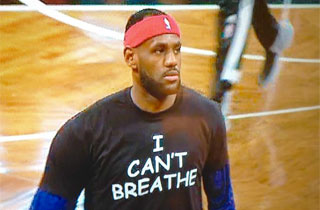 During a quick interview with the Chicago Sun-Times, outgoing Attorney General Eric Holder approved of the pro athletes supporting the Eric Garner protestors by wearing “I Can’t Breathe” shirts, singling out LeBron James and Derrick Rose in particular for lending their star power to the protests.

The shirts, which made their way into the hands of the Brooklyn Nets and the Cleveland Cavaliers during a high-profile game last week (attended by the Royal Couple and also Will and Kate), had to be smuggled into the Barclays Center after the NBA requested that players not wear the t-shirts during warmups. Days before, Rose had worn his own homemade version of the t-shirt.

The Cavs and the Nets wore the shirts anyway, and Holder said he was proud of their actions:

“For them to get out there and to express in that way a social conscience, I think goes back to maybe people that these guys don’t even know or my son has a vague awareness of, to Jackie Robinson, who is seen as not only a great athlete, but as an involved, thinking, caring black man.

“And to have LeBron, Derrick Rose and others who wore those ‘I Can’t Breathe’ shirts, that shows a level of involvement. It shows a depth to them beyond just being great ballplayers.”

Said Holder, “And it’s all about our democracy, and who we are as a country that our celebrities, our athletic celebrities, can use their status to express I think what I call a social and political point. I think that’s a good thing.”

The NBA’s involvement in these protests is such a good thing, Holder said, that even his own 16-year-old son adulates Rose more than his own dad: “As my son would point out, everybody copied him. Derrick Rose was the first one in the NBA to wear it.”