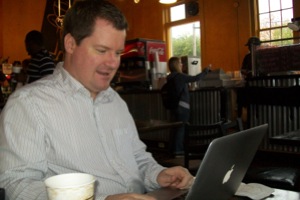 RedState Editor and CNN Contributor Erick Erickson has taken the offensive against the right lately. It began when he called for an end to the Tea Party movement, and now he’s taken on the Republican Party for an appearance by RNC Chairman Michael Steele at Al Sharpton‘s National Action Network. Is there a place on the right for someone who is neither a tea partier nor a Republican?

In a post titled “If You Give Money to the Republican Party, You Subsidize Al Sharpton,” Erickson attacks Steele for appearing at a National Action Network event and funding Sharpton. He also says he would love to see Steele deposed but reckons that the battle to get him out of there, what with the race issue, would not be worth bleeding the party dry:

One wonders the reaction if donors were told their hard earned dollars that they sent to the RNC to help elect Republicans were instead flowing to Al Sharpton.

I have no faith in Michael Steele to lead the Republican Party. He knows and I know it would be a bloody fight to remove him and he’d just hurl the race card with impunity.

On the one hand, even if Sharpton were a right-wing actor, RNC funds should exclusively be going to promote the election of Republican candidates to public office, so Erickson does have a point. On the other hand, compared with all the other stuff Steele has been spending on, giving a few dollars here and there to an organization promoting racial tolerance is probably a step in the right direction.

Erickson’s attack after his words against the Tea Party are forming somewhat of a pattern, though. He is no longer a predictable, one-dimensional right-wing actor. Sure, he promotes the propagation of his image as one-dimensional through things like his Census “shotgun” comment, but so far he has also identified himself as a right-winger that eschews both the Tea Party movement and the Republican Party and works on CNN, not a network traditionally trusted by the right. The only other choice for him by process of elimination is to be a libertarian, but he’s way too socially conservative to be that. He is certainly conservative, with an emphasis on social conservatism and family values, but social conservatism alone does not a wing identify (ask any of the millions of LGBT people oppressed by left-wing dictatorships). So where does that leave him, how many people will follow him there, and is this an early indication of even further splintering off within the right? The tent is getting awfully big, even if on the main points there is an extraordinary amount of cohesion, and the increasingly vocal opposition to some within it from people like Erickson could become either extremely constructive or extremely problematic.