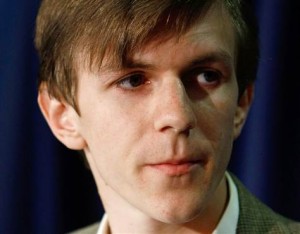 On Monday, we reported on a new investigation from James O’Keefe‘s Project Veritas that seeks to discredit a Rutgers professor and the think tank he does research for, but the main thrust of the piece, as the title “To Catch A Journalist” suggests, was an attack on The Huffington Post‘s Sam Stein. In an exclusive interview with Mediaite, O’Keefe defended his false assertion that an old journalism professor of Stein’s accused Sam of getting his sources drunk, and responded to criticism of his reporting.

“To Catch A Journalist” is the latest in a series of O’Keefe projects that use hidden video cameras and contrived situations to discredit individuals and institutions with whom he disagrees. In this case, the meat of his expose´ is a surreptitiously recorded phone call with a professor named Jeff Keefe, in which the professor assures the caller that the think tank he works for will “kill” the research (hypothetically being commissioned) if the caller doesn’t like the results. Later, O’Keefe associate Christian Hartsock confronts Keefe with a transcript of the call, and Keefe denies ever having said that. (Prof. Keefe did not return requests for comment for this article.)

On this point, O’Keefe appears to have the goods on the Rutgers professor, but as Sam Stein reported last week (before O’Keefe released this report), the think tank that Prof. Keefe does research for, the Economic Policy Institute, was contacted several times, by the same O’Keefe operative, and refused the same advances. Tape recordings of those conversations appear nowhere in O’Keefe’s reporting. When contacted for this story, EPI communications director Jody Franklin told Mediaite, “Project Veritas, an ultraconservative organization run by James O’Keefe, manufactured a story designed to discredit the Economic Policy Institute, the latest in a series of attacks on progressive organizations. EPI has a long, accomplished history of publishing reliable, credible economic studies. We stand behind our research.”

The titular scoop in O’Keefe’s piece, though, is based on another clandestine video, this one of Sam Stein’s old journalism professor, Dale Maharidge, apparently for the sole purpose of digging up dirt on Stein. The best O’Keefe’s operative can manage is to get Maharidge to tell him that Sam “goes out drinking at night with people,” and to make the observation that “you get some booze in people, and suddenly the stories start to flow.”

O’Keefe then called Sam Stein, and from that innocuous observation, told him this: (emphasis mine) “Do you booze your sources up to get a story out of them or get your sources drunk to get information out of them? Because that’s what somebody told me.”

In the piece, O’Keefe also asks why Sam didn’t “include the story about Jeff Keefe in his article,” which carries the clear implication that Stein was trying to cover up what Professor Keefe had said, when in fact, that “story about Jeff Keefe” hadn’t been released yet.

In the first part of our exclusive interview, I challenged O’Keefe about these false and misleading attacks on Sam Stein. Here’s the audio of that portion of our interview, followed by a transcript: (watch for the remainder of our interview, coming soon)

Tommy Christopher: You’ve got this story out, it’s called To Catch A Journalist Pt. 1. Who’s the journalist and what have you caught him doing?

James O’Keefe: It involves a White House correspondent for the Huffington Post, Sam Stein, who I interviewed, and he denied he boozes his sources up to get info out of them. We’re doing an ongoing series of videos investigating journalists…misinformation, bias, cover-ups, this kind of came together serendipitously, I didn’t really see this story coming together like it did, but in the course of our investigation, a journalism professor, Dale Maharidge who is a Pulitzer prize winner at Columbia, he told us that he had Sam Stein as a student. and I thought the public needed to know what he was saying about Sam Stein. I confronted Sam Stein about what the professor said, and he empirically denied it, so one of them seems to not be honest about the tactics involved.

TC: So what you caught him doing was drinking with sources?

JO I think it’s two-fold. The first part of the story is there was– we and our research into the Economic Policy Institute and Rutgers University professor Jeff Keefe. Professor Keefe was willing to kill an academic study if it didn’t reach the conclusion that a buyer wanted, which I think is unethical. The Huffington Post had a lead story on the top of their banner last week which neglected to mention anything regarding Jeff Keefe and they neglected to go undercover. It’s a big deal when an academic professor is willing to kill a story. For some reason Sam Stein didn’t dig deep enough to find that info out. So that led me to look deeper, okay this guy is a White House correspondent for the Huffington Post, he’s a political reporter, he’s gotten accolades, why isn’t he covering – why isn’t he mentioning in his lead story, this fraud we uncovered with the policy institute? That’s the first half of the story…

TC: The story that Sam wrote was written before you published any of your findings, wasn’t it?

JO: That’s right, but why didn’t the HuffPo not cover, why didn’t they dig deep enough to find out what we found out, and automatically jump to the defense of the Economic Policy Institute?

JO: If you’re an award winning journalist I think you ought to find this information out, but thats half the story. The other half is this Pulitizer prize-winning professor making a statement about his student, and that student denying that statement on the record. So I think if you put all these items together I think you’ve got quite a story.

JO: Well, I think the viewer can decide, I mean, I can’t, I’m not going going to make a…

TC: Did the professor tell you that he gets his sources drunk, and you just didn’t play that part?

JO: It’s on…no.  It’s on video. The entire thing is on video, so you can decide…

TC: Did the professor say that Sam gets his sources drunk?

TC: But answer my question. If he didn’t say that Sam gets his sources drunk, why did you tell Sam that’s what he said?

JO: Well, it’s …the way I interpreted what the professor said and I asked a question to Sam, I tried to word it exactly but Sam put words in my (mouth){what O’Keefe actually asked Sam Stein was “”Do you booze your sources up to get a story out of them or get your sources drunk to get information out of them? Because that’s what somebody told me.”-TC} … he said are you asking me if get sources drunk to get information out of them –but I think the… professor in my opinion — this is my interpretation, you can have a different interpretation — the professor at Columbia University seems to be saying he goes out drinking at night to get information out of people. That seems to be very similar to liquoring people up, boozing people up, getting them drunk, that seems to be a very similar thing, now you can cop out, and say no it’s a different thing. The denial is his.

TC: I’m a reporter in Washington DC, I go out drinking with people all the time, I don’t get them drunk.

JO: Well, he said “booze people” in order to get a story, that’s how a story starts flowing. I think that’s very similar to getting people ‘liquored up’, I’m going to put a question mark on it because people can decide for themselves whether this is a contradiction…

TC: Why not just ask him — why not relay the quote accurately? Why paraphrase it? I don’t understand.

JO: It was a one-take phone call, and he made that statement and I said what I said. I’m providing you all the facts, I’m showing you the video. So you can draw your own conclusions. I’m not misleading or misrepresenting anything because I’m publishing exactly what I asked him, and exactly what the professor said. There’s no misrepresentation here, there’s no wordsmithing on my behalf, I’m showing you videotape of what he said.

TC: You’re saying he’s denying something that you have evidence of that isn’t true. What he denied was getting sources drunk, which is not what the professor told you — so it is misleading.

JO: It’s not misleading because Im showing you the recordings.

TC: You misled Sam in your question, so you cant really criticize his answer if you didn’t relay the quote accurately, can you?

TC: But James, as a journalist, if i were going to ask Andrew Breitbart about something you said, you’d want me to quote you accurately, wouldn’t you? Wouldn’t you object if I mischaracterized one of your quotes?

JO: When I interviewed the reporter Sam Stein, it was a one-take phone call and I asked him what I asked him, and he said what he said, that’s where we stand. But because I’m showing you both tapes I’m allowing the viewer to decide. I’m allowing people to look at that tape, look at this tape, I trust Sam or I don’t trust Sam. Why did he hesitate when I asked him that question? Are we on the record, James? “Um uh no.” You can watch the tape and you can decide for yourself.