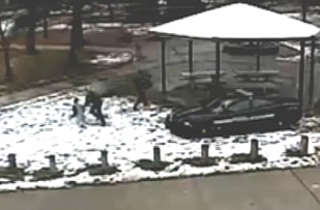 New footage of the shooting of Tamir Rice, the 12-year-old black boy gunned down by police for waving a toy gun, reveals additional shocking footage of cops tackling his sister to the ground as she ran to help her brother.

The 30-minute video was obtained by Cleveland.com after “protracted talks with city officials,” who initially refused to release it, and confirms many of the claims made by Rice’s family.

Most of the action happens about a minute and a half in, shortly after Rice is shot: Rice’s 14-year-old sister can be seen running towards her brother, only to be tackled by both cops twice. They then handcuffed her and placed her in the backseat of the police cruiser, mere feet away from where her brother lay bleeding in the snow.

According to the timeline assembled by Cleveland.com, Rice only received first aid four minutes after he was shot from an FBI agent in the area, and paramedics arrive on scene eight minutes afterwards. The two cops, along with other officers, appear to do nothing until the FBI agent shows up.

“This has to be the cruelest thing I’ve ever seen,” Walter Madison, the attorney representing the Rice family, told Cleveland.com.

“This is the level of service that makes people very upset and distrustful of law enforcement,” he added.

The shooting, executed by a cop who has a history of disciplinary problems, is currently under investigation, though the Cleveland Police Union has called Rice’s shooting “justified”

Watch below via Cleveland.com: