Fascinating Study in Optics as W. Tries to Save Jeb in SC: Is Bush 43 an Asset or Liability?
Opinion

Fascinating Study in Optics as W. Tries to Save Jeb in SC: Is Bush 43 an Asset or Liability? 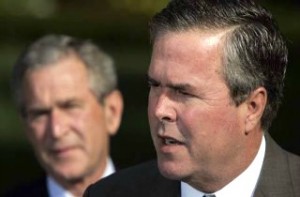 Throughout his failing campaign, the undisputed obstacle for Jeb Bush has always been about the brand. And this isn’t in reference to his record as Florida governor, which was stellar if his record on job creation (1.32 million created ), tax-cutting ($19 billion total) and GDP growth (7.2 percent average) during his tenure are any indication. Jeb would leave office after two terms in 2007 with an whopping approval rating of 64 percent.

So with that kind of record and the name recognition that comes with having a father and brother having already served as president, it’s easy to see why the big money was initially on Jeb in a pre-Trump world to waltz away with the nomination. The perspective in this space, conversely, has always been steadfastly bearish on Bush’s chances because of the aforementioned branding problem. Because while Jeb exited with that nearly 2/3rds approval in a purple state (Obama won it twice after going ever-so-barely red in 2000 and again in 2004), his father is the only one-term Republican president elected to office since Herbert Hoover (1933), while W. left office in 2009 under a deep recession and an approval rating of 34 percent (Gallup).

And that’s the big question: Is George W. Bush standing and speaking on the campaign trail alongside his younger brother a plus-positive or negative optic and soundbite? In South Carolina, it may not be such a bad thing, as W’s approval rating there stands at 84 percent among Republicans. Nationally, his approval among GOP voters is 77 percent.

But you have to wonder if the high approval is more about Bush’s likability — always one of his stronger attributes — and less about his past job performance. In terms of the way he’s conducted himself since moving out of the White House, even the most rabid partisan would admit he’s done an exceptional job staying above the fray while following his father’s classy example in keeping his mouth shut about any and all political matters. All of that said, after voters absorb see and hear Bush 43 at a rally podium once again — and this will be the big story tonight into tomorrow’s news cycle — will it serve as a visceral reminder of the Bush presidency? Or result in the warm and fuzzys that many GOPers feel when seeing him as a private citizen?

Even to conservatives, Bush isn’t exactly remembered fondly as being one of them. The bank bailouts, the pathway for illegal immigrants to citizenship… these are the type of hot-button issues that would destroy a George W. Bush campaign if he was running in 2016 instead of 2000. And 43 will never be confused with a Reagan or Obama when it comes to soaring oratory. To that end, even if things go well and his brother gives him a bump in the polls by helping him make his case to the voters of South Carolina, is the Jeb deficit to great to overcome?

He finished with 3 percent of the vote in Iowa (6th place overall), got 11 percent in finishing out of the money in 4th in New Hampshire. He’s spent $100 million — easily the most of any candidate Republican or Democratic — and he’s at nine percent… in Florida.

The brand is broken. Bringing in a sentimental surrogate in the form of George W. Bush is a Hail Mary to save a campaign that has taken on too much water to stay afloat.

But it will be interesting to see if Bush 43 — the private citizen — can be a net-positive asset for the guy who will never be referred to as Bush 45.