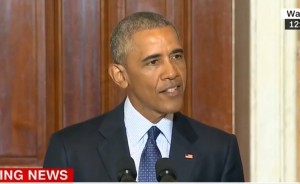 A clearly miffed President Obama took to the podium Tuesday to blast Republican critics who have made political hay out of his administration’s resistance to the term “radical Islam,” an attack that was reinforced by presumptive Republican presidential nominee Donald Trump in the wake of the Orlando mass shooting. After remarks on the progress in the fight against ISIS and a call for more gun safety measures, the President lit into his semantic critics with gusto, asking “What, exactly, would using this label accomplish?”

In blasting his critics, Obama used the phrase “radical Islam” repeatedly, and pointed out that “since before I was president, I’ve been clear about how extremist groups have perverted Islam to justify terrorism,” and that “As president, I have repeatedly called on Muslim friends and allies at home and around the world to work with us to reject this twisted interpretation of one of the world’s great religions.”

The President even threw in a not-so-veiled shot at Trump:

If there’s anyone out there who thinks we’re confused about who our enemies are, that would come as a surprise to the thousands of terrorists who we’ve taken off the battlefield. If the implication is that those of us up here and the thousands of people around the country and around the world who are working to defeat ISIL aren’t taking the fight seriously, that would come as a surprise to those who spent 7 and a half years dismantling terrorist networks, and the men and women who put their lives in risk, and the special forces I ordered to get bin Laden, and who are now on the ground in Iraq and in Syria. They know full well who the enemy is. So do the intelligence and law enforcement officers who spent countless hours disrupting plots. And protecting all Americans. Including politicians who tweet, and appear on cable news shows.