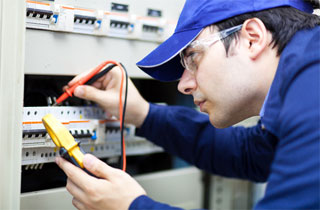 Next time your cable guy takes his sweet, maddeningly long time fixing your connection speed, it may be because they’re federal agents posing as cable guys, who broke your internet to gain access to your house to search for incriminating evidence. (Or they could just be incompetent, and you could just be paranoid. OR ARE YOU?)

Those are the allegations being made by a group of Chinese gamblers, who filed a lawsuit claiming that the FBI had snuck into their suite in Las Vegas to search for evidence of an illegal sports betting operation — a lawsuit with big implications for the Fourth Amendment.

While the FBI had plenty of cause to be suspicious — one of the gamblers had been tossed out of Macau for doing something similar — they needed to gain access to the gamblers’ suite in Caesars’ palace in order to find evidence of him doing something illegal. Working with Caesars’ Palace, they first attempted to gain access by delivering laptops and asking to test their internet connections, but were blocked by a burly butler.

So they turned to a slightly less palatable tactic, according to NPR:

When that ploy failed, the agents came up with “another trick,” according to defense lawyer Tom Goldstein: “We’ll dress up as technicians, we’ll come inside, we’ll claim to be fixing the Internet connection — even though we can’t, ’cause we broke it from outside — and then we’ll just look around and see what we see.”

Once inside, the agents wandered around the premises as they covertly photographed the rooms, entering the previously off-limits media room. Inside, they saw a group of men watching the World Cup soccer game and looking at betting odds on their laptops — perfectly legal in Las Vegas.

What else the agents saw is not entirely clear at this point, but when they left, they seemed satisfied they had enough to get a search warrant.

“Yeah, we saw what we needed to see,” an agent is heard on the tapes saying. His partner responds, “Very cool.”

Well, that’s just freaky — especially considering that, should the courts rule on the side of the government, the feds could secretly cut off any utility service whatsoever — electricity, plumbing, heat, you name it — and then pose as repairmen as a pretense to enter one’s private residence and search it without a warrant, and without you even knowing you’d been searched without a warrant.

“The theory behind this search is scary,” George Washington University law professor Stephen Saltzburg told NPR. “It means the government can cut off your service, intentionally, and then pretend to be a repair person, and then while they’re there, they spend extra time searching your house. It is scary beyond belief.”

So, yes, you should be extra leery of that incompetent Comcast guy.