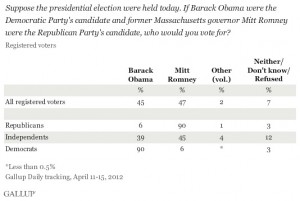 As soon as former Pennsylvania Senator Rick Santorum announced the suspension of his campaign last week, Gallup began its Daily Tracking Poll (despite the continued existence of Newt Gingrich), which tracks presidential preferences among registered voters daily, based on a rolling five-day average. The first such poll of 2012 is out today, showing Mitt Romney with a slight lead over the President, 47%-45% (within the margin of error). Embedded in that poll, though, is the frustration of every engaged voter.

It is, of course, too early to predict anything based on the daily tracking poll, but there are a few messages embedded in these numbers that cut against some of the conventional wisdom we’ve heard thus far in the campaign. From Gallup:

The race breaks down into the expected patterns by party, with 90% of Democrats supporting Obama, and 90% of Republicans supporting Romney. The Republican results show that despite the rancor and divisiveness of the Republican campaign, the vast majority of Republicans are backing Romney in the head-to-head battle with Obama, as they have in ballot tests earlier this year.

The crucial voting bloc of independents breaks toward Romney by 45% to 39%, giving the GOP challenger his slight overall edge.

That even partisan split demonstrates something I’ve been saying for months, that conservatives fretting about a lack of enthusiasm for Mitt Romney as the nominee, which led to a parade of non-Romney frontrunners, was all for naught. The Republicans could have put up Noam Chomsky with an (R) next to his name, and conservative hatred of Obama would still ensure massive turnout. Democrats have known this for a very long time, and have taken no comfort in conservative dissatisfaction with Romney.

The flip side of that is all of the hand-wringing about the nasty primary damaging Romney also appears to have amounted to nothing. He’s pulling all of his party’s votes (save 1% of likely Newt Gingrich moon colonists), and leading with independents.

Independents. Don’t you just have to love them? No matter which party you belong to, or whether you’re liberal or conservative, how does it feel to know that no matter what you do, what you say, the fate of this country is decided by people who just aren’t paying attention?

Sure, they favor Romney today, but they’ll vacillate back and forth over and over again between now and Election Day, and not because they’re poring over policy proposals and economic analyses, but because they’re dumb. If you doubt me, keep in mind that 4% of these idiots voted for “other,” and the number was probably only that low because Gallup pollsters misheard the ones who said “Ronnie” and “O’Donnell.”

If you really aren’t sure whether you want Mitt Romney or Barack Obama to be our next president, you’re either not paying attention, or you don’t believe in anything. This isn’t some tomato-tomahto difference.

That’s democracy, of course, and while I don’t begrudge people interests beyond the realm of politics, it’s just frustrating that, through no fault of their own, these people control everything.