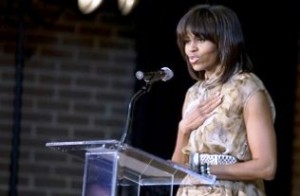 First Lady Michelle Obama was interrupted by a heckler during a speech at a private Democratic National Committee fundraiser Tuesday night. The protester, Ellen Sturtz of GetEQUAL, began shouting about President Obama’s unfulfilled commitment to take executive action to prevent discrimination by federal contractors, and was met by a firm First Lady and a hostile crowd. “One of the things I don’t do well is this,” Mrs. Obama reportedly replied, and threatened to leave. The protester was escorted from the event.

Most notable part of the event was an interruption from a protester about 12 minutes into the 20-minute speech. A pro-LGBT rights individual standing at the front began shouting for an executive order on gay rights. (Pool did not hear exactly what.)

“One of the things I don’t do well is this,” replied FLOTUS to loud applause. She left the lectern and moved over to the protester, saying they could “listen to me or you can take the mic, but I’m leaving. You all decide. You have one choice.”

Crowd started shouting that they wanted FLOTUS to stay.

“You need to go!” said one woman near the protester.

The protester was then escorted out, shouting “…lesbian looking for federal equality before I die.” (First part of the quote was inaudible.) Pool could not get their name before they were taken out.

“So let me make the point that I was making before,” continued FLOTUS. “We are here for our kids. So we must recapture that passion. That same urgency and energy that we felt back in 2008, 2012. Understand this — this is what I want you all to understand. This is not about us. No one back here. It’s not about you or you or your issue or your thing. This is about our children.”

Terkel later interviewed Sturtz for The Huffington Post, and the activist expressed disappointment that the First Lady didn’t appreciate the interruption:

“Basically, I was asked by the first lady to be quiet, and I can’t be quiet any longer. … I was surprised by how negative the crowd seemed to be. It was actually a little unsettling and disturbing,” said Sturtz.

“She obviously thought she was going to make an example of me or something. I wasn’t scared at all,” she added.

The official transcript of the event is considerably less detailed (via email from The White House):

So here’s the thing — we cannot wait for the next presidential election to get fired up and ready to go. We cannot wait. Right now, today, we have an obligation to stand up for those kids. And I don’t care what you believe in, we don’t —

MRS. OBAMA: So let me make the point that I was making before: We are here for our kids. (Applause.) So we must recapture that passion, that same urgency and energy that we felt back in 2008 and 2012. Understand this. This is what I want you all to understand, this is not about us — no one back here. It’s not about you or you, or your issue or your thing. This is about our children. (Applause.)
GetEqual put out a press release, pegged to the protest, in which Sturtz explained why she was moved to speak:

The organizers were advocating for action from the Obama Administration to sign a long-promised Executive Order that would bar any company that contracts with the federal government from discriminating on the basis of sexual orientation or gender identity. Then-candidate Barack Obama promised while running for office in 2008 to sign such an order, but has not yet taken action (http://www.metroweekly.com/news/?ak=7139). A federal contractor Executive Order would protect approximately 22% of the American workforce from LGBT workplace discrimination, and has support from the LGBT advocacy community, as well as The New York Times, The Washington Post, 37 U.S. Senators, and 110 U.S. Representatives.

“I lived and worked in the closet, hiding who I was in order to earn a living,” said Ellen Sturtz, who interacted with the First Lady tonight. “I had planned to speak tonight with DNC officials but, as the First Lady was talking about our childrens’ future and ensuring that they have everything they need to live happy and productive lives, I simply couldn’t stay silent any longer. I’m looking ahead at a generation of young people who could live full, honest, and open lives with the stroke of the President’s pen, and I was hoping that the First Lady would share my concern for all of our young people.”

President Obama has presided over an unprecedented expansion of LGBT rights, but has consistently favored legislative action over exercises of executive authority, dating back to his early refusal to suspend discharges under the now-repealed Don’t Ask, Don’t Tell policy. The President reacted quite differently to a heckler recently, indulging Code Pink’s Medea Benjamin for several minutes during a major national security speech.

Listen to the audio below, via WaPo: