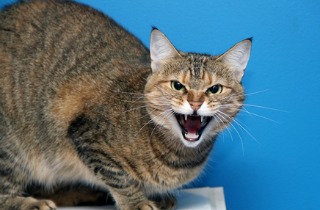 A Florida couple called the cops because (seriously) they had reportedly been attacked by their cat and claimed that their beloved household pet had trapped them in their bedroom and was basically holding them hostage.

Say it with me: Only in Florida.

The couple’s son first called the cops to tell them the cat flipped out and started attacking them. Then the couple called, explaining, “She’s got us trapped in our bedroom. We’re ripped up, I mean ripped up, pouring blood.” An animal control officer went over to the house to try and calm the situation.

The officer was attacked as well, but was able to subdue the possibly evil cat and resolve the whole thing.

Watch WPTV‘s report on the cat-astrophe below: