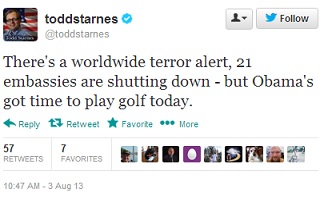 Fox New radio host Todd Starnes became just the latest conservative to blast President Obama for having the nerve to think he has a place on the golf course, even on his birthday weekend. Referencing the recent international terrorism alert, Starnes tweeted “There’s a worldwide terror alert, 21 embassies are shutting down – but Obama’s got time to play golf today,” and hashtagged another tweet about the outing with the hip-hop slang term “flossing,” which refers to an ostentatious display of material wealth.

Although substantive criticism is clearly not Starnes’ point, it seems illogical to list everything that has already been done to mitigate the threat, and then observe what the President has time for, rather than list the things he thinks have been left undone on the President’s birthday weekend. It’s like telling your kids “Your room is spotless and the lawn is mowed, yet you have time to play Nintendoes?”

Starnes doesn’t stop at that, though, also taking pains to separate out certain members of the golfing party. From Twitter:

There’s a worldwide terror alert, 21 embassies are shutting down – but Obama’s got time to play golf today.

Among those golfing with Obama today are — Muhammed Hasan Chandoo and Wahid Hamid.

According to pool reports, the President is golfing with eleven other people:

Rolling up to Andrews at 8:36 am. We hear it’s quite the birthday golf party.
Three groups of four:

The President’s opponents have tried to make an issue of several of President Obama’s leisure activities, partially in response to their own misunderstanding of a popular knock against former President George W. Bush, one which seems to be a tailor-made refutation of Starnes’ criticism. In a moment made famous by filmmaker Michael Moore, then-President Bush spoke with reporters about terrorist attacks in the Middle East that had claimed the lives of a dozen Israelis:

Conservatives will often point to this moment in Moore’s Fahrenheit 911 as all the justification they need to criticize President Obama for golfing, but they miss the entire point of that moment, as Bush did. It doesn’t matter that he was golfing, he could have been playing hacky-sack or clearing brush, or even doing something useful. The problem with that clip is the way he instantly pivots, from sincere concern about terrorism to cheerful braggadocio about a mundane task. “This is tragic, just tragic. Now watch me cannonball!”

As CBS News’ Mark Knoller noted on the occasion of President Obama’s 100th presidential golf game in June of 2012, President Bush claimed, in a 2008 interview, to have quit golf in August of 2003, because he thought “playing golf during a war just sends the wrong signal.”

This is typically backwards Republican thinking. Faced with the poor optics of sending thousands of Americans to be maimed and killed while the President plays golf, Bush elected to quit the golf, and continue the dying and maiming. As it turns out, though, he didn’t actually quit the golf, at least not when and why he said he did:

Whatever you thought of George W. Bush’s golfing habits, no one ever accused him, or his golf partners, of “flossing,” and no conservative, including Starnes, had anything at all to say when Bush played golf (or when Bill Clinton played at a whites-only club), and why would they, right? An avid golfer himself, Todd Starnes is well-qualified to decide who belongs on a golf course, and who doesn’t.