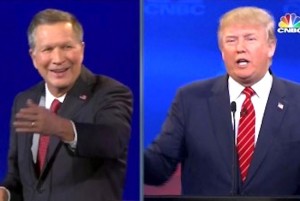 There was major hype for months leading up to Iowa. That hype extended to New Hampshire, to South Carolina and all the way to Super Tuesday. Each contest and the states involved were all properly deemed as important to deciding the next nominees for president, sure…

But none of them having anything on tomorrow’s contests in Florida and Ohio, particularly and obviously as it pertains to the Republican side. In the Sunshine State, it’s do-or-die for Marco Rubio, who trails Donald Trump in the latest Marist/NBC/Wall Street Journal poll 43 to 22 percent. That same poll shows Ted Cruz basically tied with Rubio at 21 percent. Trump’s overall RCP (Real Clear Politics) average over Rubio is 18.6 points. As Dandy Don Meredith used to croon when approaching the end of any blowout on Monday Night Football, “Turn out the lights. The party’s over.”

But kudos to Rubio for going down swinging instead of dropping out before Florida casts its ballots… at least he’s showing some pride on his home turf. Note: Those who say Rubio staying in only assures Trump a victory in Florida simply aren’t paying attention, as all the Rubio votes (those who didn’t vote early) that would have freed up wouldn’t automatically go Ted Cruz, seen by many in the establishment as almost as unacceptable an option as Trump. In the end, it would reflect more poorly on Rubio quitting before Florida voted than losing by 20 points to a candidate who is racking up big victory after big victory anyway. In the end, nobody likes a quitter. And at age 44 and showing great promise at the debates outside of that disaster in New Hampshire, he’ll be back with this experience under his belt in 2020 or 2024 if a run for governor isn’t in the cards in 2018.

In Ohio, win-or-go-home applies to John Kasich as well. Different story, however, as the governor — who has stayed out of the verbal swamp while consistently pushing a positive message based on his owning the best resume in the race — leads the billionaire in most polls there, including by six points in the most recent Marist/NBC/Wall Street Journal poll and 5 via a Fox News poll. Kasich’s overall RCP lead: 3.2 percent and climbing.

So if you’re a both a fan of political theatre and want nothing more than to see Trump not be the Republican nominee, it all comes down to these two states, just as it usually does in the general election. And if the most likely scenario occurs and Kasich wins Ohio while Rubio falls in Florida, you may get the drama culminating in every cable news outlet’s dream: A brokered GOP convention and all the uncertainty and mayhem that will go along with it. Remember The Thrilla in Manila? Get ready to hear over and over about The Quagmire in Cleveland, the site of said convention in July (Chaos in Cleveland also works).

And that’s what makes tomorrow’s contests in Florida and Ohio easily more important than all the state contests leading up to this one. The great Tim Russert once famously used a white board to plainly and effectively explain the night of the 2000 general election what it was all going to come down to:

With all the graphics in the world and high-tech wizardry at his disposal, the late moderator of Meet the Press simplified the one thing viewers needed to understand the night of the election in patently old-school fashion. In 2016, if he were still around, he would likely hold up this white board to make the story just as easy to absorb by writing this:

If Kasich takes it and Rubio knocked out of the race via Florida, it leaves the Ohio Governor as the only establishment candidate left standing. From there, Cruz and Trump would essentially split the anti-Washington vote, with the result being the latter having a very difficult time getting above the magic 1237-delegate majority needed to win the nomination. Result: A multi-ballot, UFC-style convention for the nomination in the Rock & Roll capital of the world.

Ohio. Ohio. Ohio. If you loathe Trump and/or prefer all the reality TV political drama to continue for at least four more months, it all comes down to essentially one state.

And if you’re running Fox, CNN or MSNBC or any news outlet, and like the ratings you’ve been seeing over the past nine months since Trump announced, well… you would love absolutely nothing more than the anarchy continuing for the next 128 days. That means more Town Halls, more debates, more you-couldn’t-script-this content to play with… all before things get even more interesting in the general.

Ratings gold followed by an even bigger pot at the end of October.

If you’re in the political news business, enjoy this while it lasts.