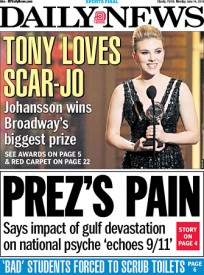 Forget Katrina, President Obama opened the headline floodgates this weekend and compared the catastrophic oil spill in the Gulf to 9/11. Obama gave an Oval Office interview to just-returned Politico reporter Roger Simon and linked the two events together thusly:

“In the same way that our view of our vulnerabilities and our foreign policy was shaped profoundly by 9/11…I think this disaster is going to shape how we think about the environment and energy for many years to come…“So I’m going to be fighting on their behalf and doing everything I can and using my bully pulpit to communicate that fact to the American people…I know there’s an anti-incumbent mood out there right now because … people are frustrated about the hit that the economy has taken. … But what I’m going to remind people of is we didn’t create this mess. And this Congress responded forcefully at a time when this economy really could have fallen off a cliff.”

Obama is not the first to make the comparison; a few weeks back Shep Smith similarly linked the two. Obviously Obama’s statement carries a great deal more weight than Shep’s. And while he is certainly not saying that the BP spill is a new 9/11, Obama must know the resulting headlines will inevitably construe as much. Subsequently, I can’t help but wonder if it represents some hopeful thinking on his part: it would certainly be to the administration’s advantage to change the Spill narrative from one of government incompetence to one of the nation being under attack. Additionally, it is being reported that Obama will use Tuesday’s Oval Office address in part to propose a new energy-climate law. By redirecting the spill comparisons from Katrina to 9/11 Obama may be trying to infuse the spill with a sense of urgency that could help propel an inevitably unpopular climate bill through Congress.