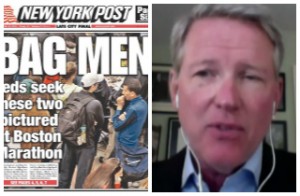 The backlash against the New York Post‘s decision to run a photo of two innocent bystanders at the Boston Marathon last Thursday under the headline “BAG MEN” continues this week with some harsh comments from former ABC News president David Westin. Speaking with HuffPost Live Monday, Westin called the Post’s cover “not just wrong, but inexcusable.”

“When you’re putting photos up like that, you must realize that you can lead to almost a lynch mob mentality and you have to be very very careful,” Westin said. “Mistakes always get made in breaking news — I made mistakes when I was running ABC News — but it once was the case that when you made a mistake, you took it really seriously, you apologized for it and you did whatever you could to avoid it. That doesn’t seem to be as common these days.”

In the case of the recent New York Post “mistake,” editor Col Allan did not apologize, but rather released a statement saying, “We stand by our story” and claiming the paper did not “identify [the two men] as suspects.” Owner Rupert Murdoch weighed in two days later saying the photos were “instantly withdrawn when FBI changed directions,” a dubious claim at best.

Asked about the Post‘s attempts to explain their actions, Westin called their defense “disingenuous.” Instead, he argued, any news organization in that situation should “own the blunder, say you made a mistake, and apologize for it.”