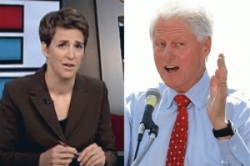 Apparently the Clinton claws are out for Rachel Maddow. Yesterday, on the syndicated radio show ‘America’s Morning News’ Lanny Davis, longtime supporter, and former White House counsel to President Bill Clinton, called Maddow “sanctimonious and intolerant” and part of the Dem’s “Tea Party side.” This in response to Clinton’s remarks the other day pushing back at Maddow’s criticism from last March when she called Clinton the “best Republican president the country has ever produced.” From Davis:

Yes! This is exactly how I would describe Rachel Maddow, one of the few cable news hosts who has people of differing parties and views on her show for actually meaningful in-depth interviews that rarely, if ever, include raised voices. I think the accurate translation here might be, we are angry at Rachel Maddow for not toeing the Liberal line and being nice to Bill Clinton. Also, of all the cable hosts out there Rachel Maddow is the one you want to pick a fight with? Either Davis doesn’t actually watch TV or this is the latest evidence Maddow is becoming the top media voice on the left. You can listen to his remarks below.