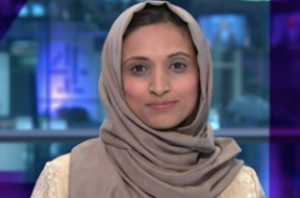 A former editor for British tabloid The Sun is getting a lot of blowback for critiquing a news channel’s decision to let a Muslim presenter on the air after the terror attack last week in France.

In a Monday column, Kelvin MacKenzie went after Fatima Manji by specifically noting that she wears the traditional headscarf of the Islamic religion. MacKenzie went on to say that it was “massively provocative” to have Manji on as details continue to come in about the French-Tunisian who has since been found to have an interest in ISIS propaganda before he killed 80 people.

“Was it appropriate for her to be on camera when there had been yet another shocking slaughter by a Muslim?” MacKenzie wrote. “Was it done to stick one in the eye of the ordinary viewer who looks at the hijab as a sign of the slavery of Muslim women by a male- dominated and clearly violent religion?”

Channel 4 News, the network that had Manji on, responded by defending the quality of her journalism and blasting the piece for insinuating that her faith was a litmus test for what stories she can cover.

The piece has since received over 800 reported complaints, and has been subject to online criticism as well.

When xenophobia becomes this acceptable we should all be ashamed. This comment piece is gutter journalism @TheSun https://t.co/iHAIfPRogt

What is a “regular” reporter? And for the record Fatima Manji has reported on some of the biggest stories. At least get your facts right.

I’m hard to shock but speechless that @Channel4News @fatimamanji has been treated this way by @TheSun @TellMamaUK pic.twitter.com/REv4fCeqLY

Even Manji herself deigned to address the controversy:

And to those asking, yes my presenting tonight was long planned – had thought it might be a quiet Friday, instead very tragic

Interestingly enough, The Sun deleted their original tweet after publishing the story, though it is still available on their website.