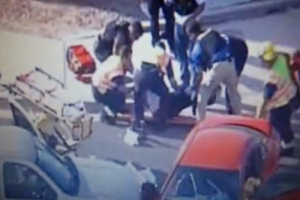 For most TV viewers, car chases are fun, exciting novelties, usually on a warm, languid summer day, that can brighten up any notoriously slow August news day. We already know that, at least for Shepard Smith, narrating them is an artform. But for the guys who have to actually follow the cars in the news chopper? Let’s just say being a helicopter pilot can make you quite jaded about this sort of thing.

Yesterday, a car chase in Arizona took the Fox 10 Phoenix team across a number of towns following the suspect and victim of a carjacking until an unsuspecting vehicle crashed into it and stopped the car. On TV, the chase ended as soon as law enforcement officials were able to stop the car– after all, that’s usually where the fun of a car chase dies, unless a suspect is a particularly good runner. This one wasn’t, and, in fact, was taken out on a stretcher suffering from a gunshot wound to the leg.

The chase aired late on the Fox Report, and viewers were told to visit FoxNews.com for the live feed coming in from Phoenix after the show ended. Instead of having the reporters narrate the story, the only people heard on the live feed are those operating the helicopter. As the pilot notices the suspect is being carried out, conscious, on a stretcher, he laments the suspect’s fortune, telling another unseen person on the video, “Eh, if only it would’ve killed him. If only it would’ve killed him first; would’ve been better.” His companion asks him something unintelligible, which, given his response, must have been something hesitant about the fact that he was sad someone had not died. “I don’t care,” he grumbles. The feed then abruptly breaks off, a sign that whoever was in the control room watching the feed was probably not too happy about the response.

There are two clips in the following video. The first is the television broadcast of the end of the chase up until when the report ends. The second is the final minutes of the chase on the internet stream, where the pilot chatter is clearly audible. Watch both below: