In recent months, I’ve had the same conversation with some of my more liberal friends over and over again. When discussing the latest offense caused by Rush Limbaugh. At some point, I let it slip that I kind of love the guy and my friends stand back aghast. I helpfully explain that, sure, Limbaugh says awful things nearly every day, but he clearly finds so much absolute joy in pissing people off, that I have a hard time really getting mad at him. I mean, after nearly every vaguely sexist or racially suspect comment, you can literally hear the guy laughing as he imagines what the liberal blogs will say. So, keeping with that spirit, I have to give the good folks at Fox Nation credit for writing one of the most wonderfully awful headlines of all time. 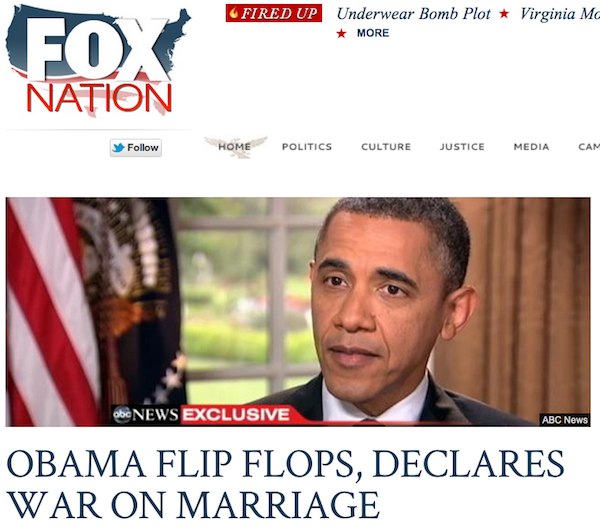 Isn’t that just wonderful? I mean, obviously it’s horrible, but there’s a true artistry to its horribleness. Even the Drudge Report went with the plain headline “NOW ENDORSES GAY MARRIAGE.”

For those that don’t know, Fox Nation is, officially, a “forum for Americans to speak out on important and controversial issues, and to act on their beliefs and values.” In other words, it’s the place where news stories are aggregated and given incredibly offensive headlines so that commenters can say horrible things about them. This is the site that previously published an anti-Obama Onion stories without saying it was a joke and described the President’s birthday party as “a hip-hop BBQ.” That last headline was apparently the last straw that caused the recent Fox News mole to go rogue.

And now they’ve aggregated an ABC News story about Obama saying he supports same-sex marriage by calling it a “flip flop.” Sure, it’s slightly different than the original ABC headline, but who cares? This one is more offensive and therefore more fun!

It’s literally Fox Nation’s job to write terrible, terrible things to piss off people like me. So I really can’t get too mad at a headline like this because, damn, these people are good at their job.

UPDATE – 4:26pm: The headline has been updated, with the “Declares War On Marriage” part removed. Now the President has just flip flopped.

Honestly, I’m a little disappointed. Like the “Hip-Hop BBQ” headline, the “War” one really was almost charming in how outrageous it was.