Fox News’ Ellis Henican: Wikileaks Is ‘Kind Of Like’ The Drudge Report 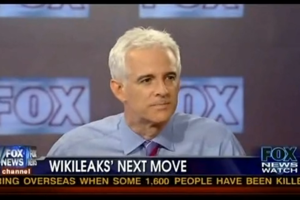 In a comparison that is sure to upset nearly everyone involved, Fox News contributor and Newsday columnist Ellis Henican compared the mysterious whistleblower site Wikileaks to the mysterious right-wing aggregation site the Drudge Report on Fox News Watch yesterday. His comparison was in response to the description of Wikileaks as a “collection bin,” but this is probably a more remarkably apt analogy than Henican initially realized.

Henican was discussing whether Wikileaks was a journalistic organization– a hot topic nowadays given their release of what they have dubbed the Afghan War Diaries— with fellow panelist S.E. Cupp, who was attacking Wikileaks for having as their sole purpose, according to her, “to discredit and dismantle our war efforts and at any cost.” She refused to call their efforts journalism, claiming that, should they also work for whistleblowers in the tobacco industry or DC lobbyists, she would be more comfortable with them. For now, “hey’re just a collection bin for, for you know, documents.” Henican responded: “Kind of like the Drudge Report, right?”

Wikileaks, naturally, was peeved by this insolence, though they didn’t seem to take too much issue with Henican’s comparison– in response to Cupp’s claim that she would be ok with the organization if they served tobacco company whistleblowers, they tweeted out the entirety of their (quite formidable, but nowhere near the size of their war reports) tobacco industry archives. And they don’t have too much of a reason to be angry. Aside from the obvious differences in ideology, methodology and ultimate goal, there are a good number of similarities between the two organizations:

Given that they had both been involved in controversies with editing videos and releasing information that was detrimental to the American government (though obviously on different levels)– and that their styles on cable news are so vastly different– I have always thought it would be interesting to watch a discussion between Assange and Andrew Breitbart. But I think Henican is onto something bigger here with the comparison between Assange and Drudge, and given the way in which the Drudge Report surfaced and Drudge’s clear leanings in favor of open information online, there would be a lot to gain from putting these two on a talk show or panel somewhere. The existence of both sites make it increasingly clear that further dialogue on new media and its impact on the beast we call journalism is necessary, and, really, who better debate the issue than the people on either side that have caused old media the most frustration?

The clip from yesterday’s Fox News Watch below: