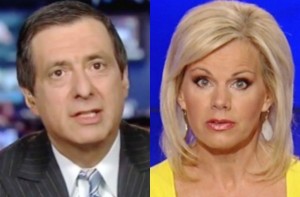 If you were wondering whether Fox News would cover the lawsuit one of their former anchors filed against Fox News Chairman & CEO Roger Ailes, they actually did.

Not on TV, but tonight Fox News’ own Howard Kurtz filed a report on the lawsuit.

Gretchen Carlson is alleging that Ailes sexually harassed her and made inappropriate remarks on a number of occasions. Ailes fired back by calling it “defamatory” and claiming she “became aware that her career with the network was likely over and conveniently began to pursue a lawsuit.”

Kurtz notes in his reporting that Carlson left when her contract expired in late June, and he says, “The salacious nature of the lawsuit, filed in Bergen County, N.J., generated immediate headlines online.”

Now, to Kurtz’s credit, he goes through the allegations of what the head of his network and colleague Steve Doocy are accused of, but he notes from the legal complaint, “While the lawsuit is based in part on alleged comments by Ailes in private conversations with Carlson, it provides no e-mail, texts or voice mail as evidence.”

Carlson’s attorney said earlier today they have evidence they will be releasing in court.

And Kurtz does go out of his way to highlight Carlson’s past praise of her boss:

When the new program was announced, Carlson said: “I am thrilled that Roger Ailes has given me the opportunity to host a signature show for Fox that will focus on the real stories of the day.”

In her book “Getting Real,” published last year, Carlson called Ailes “the most accessible boss I’ve ever worked for,” and said “he saw Fox as a big family, and he cared about everything we did.” She said he had even urged her to speak occasionally about having been Miss America in 1989.

He also notes, “She lost to CNN more often than any other Fox News program.”