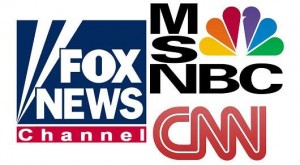 With the election grabbing so much attention this year, 2016 turned out to be a banner year for all three major cable news networks.

At the top of the heap was Fox News, who continued their lengthy run as the most watched cable news channel. Besides being king of the cable news mountain, Fox News was also nabbed the top slot among all basic cable channels and ranked only behind the four broadcast networks in terms of primetime viewership, averaging 2.4 million viewers and outdrawing ESPN, which finished sixth in primetime.

Drilling down to individual programs, Fox News had a lot to be happy about when it came to its primetime lineup. The O’Reilly Factor remained the top-rated show in cable news, topping all programs in total viewers (3.3 million) and the 25-54 demo (572,000), and experiencing double-digit growth compared to last year. The Kelly File enjoyed its best year since its launch, finishing as the second most watched program in cable news in both total viewers (2.7 million) and 25-54 (533,000). Another primetime program, Hannity, saw big gains over last year, with 2.3 million total viewers (+44%) and 511,000 in the demo (+46%).

On CNN, both CNN Tonight with Don Lemon and Erin Burnett OutFront experienced their best years ever. CNN Tonight posted a 69% increase in the 25-54 demo and 78% in total viewers. OutFront grew by 53% in total viewers and 46% in the demo. CNN also attracted the most primetime viewers of any channel on TV on Election Night.

MSNBC’s program highlights included The Rachel Maddow Show giving the network its biggest 9 PM audience ever for both total viewers (1.4 million) and the demo (339,000). The Last Word with Lawrence O’Donnell also gave MSNBC its biggest 10 PM total viewership (1.3 million) ever, and its largest in the demo (277,000) since 2012.