Fox’s Kelly, CNN’s Cooper Correct to Not Share Name of Shooters in Mass Killings; Here’s Why 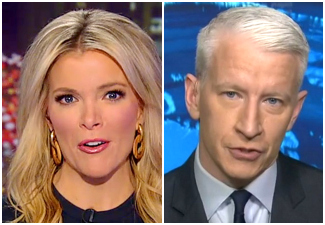 The question is simple but the answer complex: Should the media adopt a policy which states it will not share the name of those responsible for mass shootings?

I asked this question back in 2012 the day of the Sandy Hook shooting: Why do we even have to mention his (the shooter’s) name? Why show his photo? As Douglas County (Oregon) Sheriff John Hanlin stated yesterday, “I will not name the shooter. I will not give him the credit he probably sought prior to this horrific and cowardly act. You will never hear me mention his name. We would encourage media to avoid using it, to not repeat it. We encourage you not to glorify and create sensationalism for him. He in no way deserves this. Focus your attention on the victims, on the families, helping them get through this difficult time.”

Hard to argue with that sentiment. And cable news hosts like Fox’s Megyn Kelly and CNN’s Anderson Cooper have followed suit by not sharing the names or photos of mass murderers in these situations on their respective programs. It’s largely a symbolic act, of course, as it takes all of two seconds to find that information online or on social media. And even if every on-air anchor or host didn’t share names or faces in these situations, those who want that information and/or visual can and will find it.

But is that really the point? Because perhaps if the heads of every major broadcast news organization got together and decided that the don’t-name-the-shooter policy should be universal across ABC, NBC, CBS, Fox and CNN, that would pressure others to do the same. Not all will be on board, of course, and there is the unfortunate business end of this as well, but it’s worth a shot. Critics will counter that withholding this kind of information (name, photo, etc.) amounts to censorship. But the question is: If an outlet still shares all the facts of a story but omit a name and photo, is that still censorship?

And look, nobody is saying this act puts an end to mass shootings in this country. But it’s impossible to ignore this joint study from Arizona State University and Northeastern Illinois University that finds “20 to 30 percent of attacks are set off by other attacks.” In other words, mass shootings do inspire copycats, and there’s no denying these kinds of attacks are alarmingly on the rise:

“On average, mass killings involving firearms occur approximately every two weeks in the U.S., while school shootings occur on average monthly,” according to Sherry Towers, a research professor at ASU.

The debate (a refreshingly civil one between competitors) extended into social media between the aforementioned Kelly and CNN’s Don Lemon last night:

My friend @donlemon says “we (TV news) must identify him b/c that is our job.” No. Print media can. TV gives infamy he prob desired. Don’t!

Hi Megyn. My heart agrees with you, but I believe we (journalists) must name shooters. Sparingly though. https://t.co/3UVmixNECP

There are no simple and easy answers around how to reverse this horrific trend happening in this country. The President is correct when he stated media coverage will be the same as it was the last time a mass shooting occurred, and all the times before that. To his point, as a host covering this on the air last night as facts were coming in fast and furious, I found myself going through a perfunctory checklist in my head in terms of questions to the panel…as if it were muscle memory: Is this the new normal? Are we numb by these events at this point? Are gun-free zones pointless? Could any gun law, proposed or on the books, have prevented this? On a sprawling campus like this, could any security force have prevented this considering how fast these executions occur? What do we do to improve mental illness treatment in the U.S.? Why does this occur here much more than any other advanced country? Do we all have a responsibility to be more vigilant on social media?

And the answers will come and go…until the next shooting…when we’ll all be horrified and disgusted again.

In the meantime, the powers that be in media should really consider getting together on this issue and come to a unified conclusion.

It might make a difference, it might not. That’s how it works with prevention: We’ll really never know. But given the copycat study and little downside, it’s a conversation worth exploring.