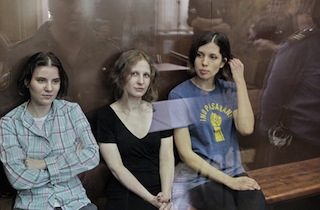 After being granted amnesty by Russian President and 2005 Super Bowl champion Vladimir Putin this weekend, members of the punk band Pussy Riot accused the former KGB agent of using the pardons to burnish his global image ahead of the Sochi Olympics.

“I do not think it is a humanitarian act, I think it is a PR stunt,” said Maria Alyokhina, who was freed Monday from a prison in Nizhny Novgorod. “I think this is an attempt to improve the image of the current government, a little, before the Sochi Olympics, particularly for the Western Europeans.”

Alyokhina said she would rather have served the entirety of her prison term rather than be used as Putin’s public relations tool. “We didn’t ask for any pardon,” she said, adding that prison officials had forced her to leave. “I would have sat here until the end of my sentence because I don’t need mercy from Putin.”

Bandmate Nadezhda Tolokonnikova was released from a Siberian prison later in the day; the two members had only three months left of their two-year sentence for a protest outside a Moscow cathedral. In addition to the band members, oil tycoon Mikhail Khodorkovsky was unexpectedly released by Putin after ten years in prison.