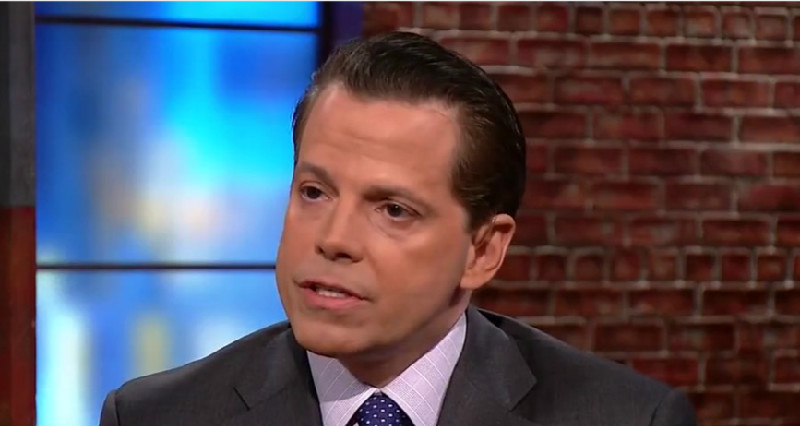 Arthur Schwartz, a friend of Anthony Scaramucci who has been referred to as his publicist, warned Reince Priebus that he would “start dropping oppo” on the former White House chief of staff, adding “Mistress much?” in a Sunday morning tweet.

The tweets have since been deleted, but of course, screenshots live on forever: 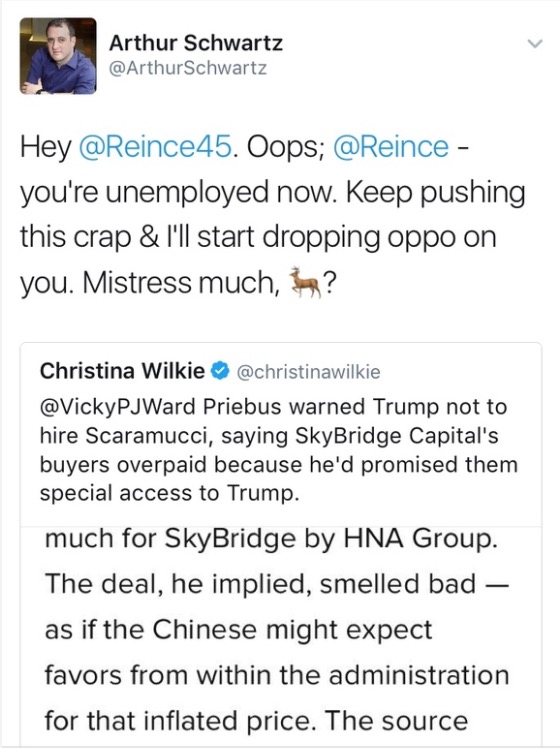 The tweet was in response to a HuffPost story, which Schwartz presumably believes was sourced from Reince, that detailed Priebus’s concerns with Scaramucci’s business dealings.

Schwartz added that he would be happy to start “trashing [Priebus] in the press” again:

Hey @Reince. Remember when people told you that it was me that was trashing you in the press? They were right. Happy to start again, ?.

The tweets were quickly noticed by CNN’s Jake Tapper, who retweeted them noting they came from Scaramucci’s publicist. Schwartz has been quoted in a number of Fox News and New York Post stories as a representative of the now-White House communications director.

Schwartz replied to Tapper with a number of tweets denying that he ever worked for Scaramucci, claiming he was incorrectly identified in the stories. He also threatened legal action against the CNN anchor:

Again, for the 50th time: No. I have never worked for Anthony. Keep it up and you’ll be hearing from counsel. https://t.co/dkuxnF6bYa

Tapper then asked if Scaramucci had sanctioned Schwartz spreading rumors about Priebus’s social life, and Schwartz said Mooch had called to tell him to “cut it out”:

Schwartz also tweeted out a screenshot of his conversation with Dana Schuster of the New York Post, in which he made clear he is not a publicist:

Scaramucci’s friend lobbing accusations that Priebus — who was replaced by Homeland Security Secretary John Kelly as chief of staff Friday — has a mistress, comes after Scaramucci asked for his family to be left out of the news in light of his wife’s filing for divorce.

UPDATE 10:53 a.m.: Schwartz announced on Twitter that he deleted his tweets about Priebus and apologized to him — adding “I’m ashamed of what I said.”

I deleted my tweets re @Reince & apologized to him. Pretty sure he’s not accepting my apology. Can’t blame him. I’m ashamed of what I said.