From Radio Silence to Full-On Media Bashing: How The Donald Got His Groove Back in 5 Tweets
Opinion

From Radio Silence to Full-On Media Bashing: How The Donald Got His Groove Back in 5 Tweets 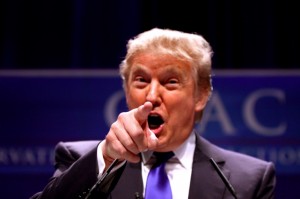 This morning, the cheeky crowd over at Politico headlined their website with a counter to indicate how long it had been since Donald Trump Tweeted. It may sound like a strange thing to tally, but considering the GOP frontrunner lives on the social media platform, it was noteworthy to see him silent after finishing second (losing) the Iowa Caucus.

The official time away from Twitter after finishing second in Iowa (losing) clocked somewhere around 16 hours; I can’t say for certain, since Trump has since deleted his latest Tweet from Monday night, one encouraging Iowa voters to get out and caucus around 7:30 p.m. (His page currently reflects one from early Monday morning, but anything past that on Monday seems to have vanished).

Regardless, at 11:03 a.m. ET Tuesday morning, the real estate mogul and former favorite to win the Iowa Caucus dusted off his iPhone keys and got to Tweeting. He started innocently enough, seeming to take his medicine in stride:

My experience in Iowa was a great one. I started out with all of the experts saying I couldn’t do well there and ended up in 2nd place. Nice

Because I was told I could not do well in Iowa, I spent very little there – a fraction of Cruz & Rubio. Came in a strong second. Great honor

A “great honor” the man declares! Look at him go. I wonder if he eats his humble pie with a fork and knife, too.

Then, confidently asserting his manliness over his 5.98 million Twitter followers, Trump’s bravado grew three sizes within minutes, swinging back at 11:29:

The media has not covered my long-shot great finish in Iowa fairly. Brought in record voters and got second highest vote total in history!

FROM THE ASHES A PHOENIX SHALL RISE! Donald J. Trump — racist eater of burgers, occasional skipper of debates, loser of Caucuses — was returning to his old form, blindly swiping away at the media that has covered all of his moves since June, short of pee breaks at the little real estate mogul’s room.

I will be talking about my wonderful experience in Iowa and the simultaneous unfair treatment by the media-later in New Hampshire. Big crowd

MAKING TWITTER UNBEARABLE AGAIN! And finally, Trump fired off his last pity party of the morning, proving once and for all that his humility is as shortly lived as his chances of winning the Iowa Caucus:

I don’t believe I have been given any credit by the voters for self-funding my campaign, the only one. I will keep doing, but not worth it!

There you have it — how Donald got his groove back, Stella style, in only 36 minutes. Time will tell if finishing second in Iowa (losing) will have a permanent impact on the man; for instance, will he blindly retweet bimbo attacks at Megyn Kelly anymore? How about his penchant for tacitly supporting white supremacists on Twitter? Retweeting laughably false crime statistics? Or terribly photoshopped accusations of Fox News-Saudi Arabia ties?

For the love of both Corinthians, someone take this man’s phone away.