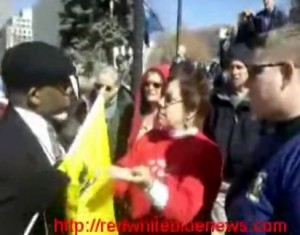 Wednesday, we brought you the story of 52 year-old entrepreneur Leland Robinson, a black Tea Party protester who was subjected to racist and racially-charged heckling at a pro-union demonstration in Denver, Colorado. RedWhiteBlueNews.com, the website that posted the video of the encounter, has now posted a longer version of the clip, which provides a fuller picture of what happened at the protest.

Now, I’m not interested in the “my protesters are better than your protesters” tit-for-tat that everyone else seems so enamored with, and I never have been. The racially-charged taunts that were used on Leland Robinson represent some of the worst that America has to offer, but I think that the longer clip serves to illustrate some of what’s so great about it.

The watchword in political discourse, lately, has been “civility,” but in a great country such as ours, strong opinions, expressed strongly, are the moonshine in democracy’s gas tank. While there’s no place for racism, violence, or threats of violence, I personally think that the rest of this clip courses with the hot blood that keeps this country vital: (warning: there is some NSFW language)

As you can see, things start out with a good old-fashioned, spirited-as-hell debate between Leland and a schoolteacher, and if you leave out the racially-charged stuff, this conversation crackles with the energy of democracy. I really wanted to hear Leland’s second choice for teachers (after “Quit your job”), and I was fine with his suggestion that teachers all be “f***ing fired,” and with the teacher’s response that you don’t know what work is until you’ve taught. I only wished I could have heard more about the entrepreneurial model of public school teaching.

This was all the stuff of great American barroom debates and tense holiday dinner tables, and I wouldn’t inject lifted pinkie or Grey Poupon high-fallutation into it for all the cheese in Madison, Wisconsin.

What’s also great about the longer clip is that you can see how someone immediately challenged Linda Sari, the woman in red, on her “Do you have any children that you claim” remark. She tries to backpedal, but the video makes it apparent that she’s trying to dig herself out. To her credit, she later copped to the racism in her remark, telling blogger El Marco “What I said is racist, but I am not a racist.”

The blogger who first broke this story, whom I’ll call RWBN, wasn’t too happy with my story at first, but we’ve since had a chance to talk things over. I’d like to clarify a few things about that first story. When I wrote, of Linda Sari, that she was “a random buttinski who just happened to be in the capitol that day,” the phrase “random buttinski” was mine, but the fact that she wasn’t with the union protesters, and happened to be there and decided to lend her support, was accurate based on what RWBN told me, and which hews closely to what she actually said on the video.

He also shot a lot of other video that day, if you like this sort of thing.