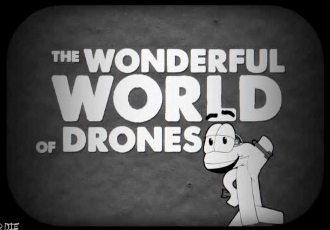 Unmanned drone warfare is fast becoming the new tactic of “efficiently” and “less brutally” dealing with enemy combatants in the War on Terror. President Barack Obama‘s administration has done little to deny the New York Times‘ report about a so-called “kill list” of people to eradicate using targeted drone strikes. The use of drones in Pakistan, Yemen, and other Middle Eastern nations has generated controversy among the left and right. And now many local police departments want to use unmanned drones for surveillance and law enforcement purposes.

Fear not, says Funny or Die. In a 1950s-style mock-instructional video, Christopher McDonald (best known as Shooter McGavin from Happy Gilmore) jokingly attempts to placate those fears and inform us on “the wonderful world of drones.”

“A lot of people look at these modern marvels and see automated soulless flying death-dealers that spy on all our private lives,” McDonald begins. “You can trust me when I say: those people are communists.”

The video then offers helpful tips for living with drones:

Tip one: One way to make sure you don’t become a recipient of a free drone strike is to never, ever have a wedding anywhere near where a drone might be. Drones hate weddings.

Tip two: Try to remain a civilian in any war zones. What makes someone a civilian, you ask? Who knows! But if you’re a baby or already dead, you’re already 75% less likely to be shot by a U.S. drone.”

“Also, try not to have brown skin,” reads the text beneath McDonald.

“Drones are no more dangerous than a post-breakfast cigarette,” he continues. “You ask, ‘How come people overseas get all the benefits of these miracle machines?’ Well, good news, friend: They’re coming to a sky near you. Yes, our boys in blue can’t wait to get their hands on these babies — perfect for busting bad guys and watching citizens without their consent.”

“But mister,” asks a child wearing a goofy propellor hat, “what if the drone gets a glitch and malfunctions? And what if it’s used to shatter innocent people’s privacy? And what if –”

“Haha, somebody’s been reading too many funny books,” McDonald says, shoving the child away. “Now run along, Timmy, I’ll be reporting you to the authorities later.”

– RELATED: VA Governor Wants Police To Use ‘Great’ Surveillance Drones Because ‘We Use [Them] On The Battlefield’

The final tip McDonald offers: “Never show a drone fear, because only the guilty have reason to fear drones.” This mocks the oft-repeated defense of law-enforcement overreach that only the guilty should care about surveillance, wiretapping, warrantless searches, etc.

All in all, it’s a pretty cute send-up of drones, but also fairly accurate: several prominent politicians, including Virginia Governor Bob McDonnell, have advocated for the local use of unmanned drones by law enforcement.

But fear not, civil libertarians, because as the video caption reads: “There’s nothing to fear from unmanned drones. Unless they’re blowing you up.”

Check out the sketch below, via Funny or Die: