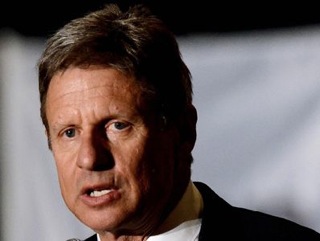 Today has brought the well-expected but somewhat long-awaited news of the third major exit in the 2012 Republican race, after Tim Pawlenty‘s early withdrawal and Herman Cain‘s dramatic departure. Former New Mexico governor Gary Johnson has announced in a message to his followers that he will no longer be seeking the Republican nomination, but that of the Libertarian Party, which would also put him on a general election ballot in all fifty states.

Johnson wrote in a letter to his supporters that the move was both “a difficult decision– and an easy one,” because of his history with the Republican Party but also because of his exclusion from many debates and disagreements with most candidates. He went on to issue a harsher condemnation of his former Republican colleagues:

Frankly, I have been deeply disappointed by the treatment I received in the Republican nomination process. Other candidates with no national name identification like Herman Cain, Rick Santorum and Jon Huntsman were allowed to participate in the debates.

Incredibly candidates with no executive experience like Michelle Bachmann and Rick Santorum were allowed to participate while I, a successful two-term governor with a solid record of job creation, was arbitrarily excluded by elitist media organizations in New York. My appeals to the Republican National Chairman for basic fairness were ignored.

He went on to speak also of the one major problem with his campaign vis a vis the Republican landscape in polls today: with Rep. Ron Paul running, what more could he contribute to the conversation? “While Ron Paul is a good man and a libertarian who I proudly endorsed for president in 2008,” he explained, “there is no guarantee he will be the Republican nominee.”

He goes on to reiterate his libertarian agenda and announce some upcoming events– Reason has the full announcement.

While Johnson’s shift may seem like small potatoes compared to the larger stories happening in the 2012 campaign, his chances at being a factor in the general nomination (should Libertarians nominate him, and they probably will) are what make this a story. The increasingly obvious fragmentation of the Republican Party makes it clear that a unified party supporting one candidate without internal turmoil is an unlikely scenario– and with independent or unaffiliated voters making up a larger part of the voter base than they have at any time in the past, there are many more people out there open to defecting from the two-party system.

This is particularly true in Johnson’s home state of New Mexico, where, when he was a Republican, his popularity made him the only Republican in the race who was actually liked by the people who saw him in action. Yes, President Obama swept New Mexico in 2008, but the rift in that swing state may manifest itself greater than before should Johnson go up against a big government Republican (in which case the divide will be a matter of personal ideology among voters) or even Rep. Paul himself. It is arguable that a Paul/Obama/Johnson general election would cause even more voters to defect to Johnson, particularly libertarians or independents to whom Rep. Paul’s message appeals but are discomforted by his extreme foreign policy views and his bizarre newsletter scandal.