Gender Bias And The Self- Objectification Of Julian Assange 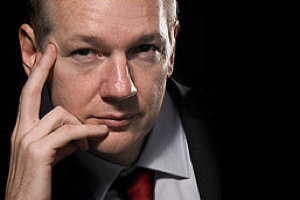 If there is one cardinal rule that binds all media and all mass production of information, it’s that sex sells. It sells big and it sells female, whether it’s scantily clad photos of Fox News’ leading lady or x-rays of curvy skeletons in heels. It’s been the bane of the existence of many women for decades, and instead of subsiding for them as media evolves, something bizarre has begun to happen: what do we make of our culture when the sex that is selling is gaunt, male, brainy, and wanted by Interpol for “sex crimes“?

Frequenters of online information pirate website Wikileaks surely must have noticed something new when the company, booted out of their original domain name Wikileaks.org, landed on Swiss servers at Wikileaks.ch: the website’s proprietor, Julian Assange, reclined casually over the site’s header, in what appears to be an expensive suit and a come-hither look worthy of a teen heartthrob (that look courtesy of Forbes Magazine, whose cover the photo graces this month). Should you miss him on the homepage, Assange also asks for money to support the site on every single page of the newly-leaked US diplomatic cables in the same pose, in which there is an unequivocal appeal to his sexuality.

Why is a man wanted by Interpol for sex crimes littering his website with seductive photos of himself? Given what we know about Assange so far, the short answer is self-indulgence. This is a man who allows no room for dissent in his organization; who will walk out of an interview at the drop of a hat and spend the day tweeting catty things at the Pentagon like a Kardashian. There is no stooping too low when egos are concerned– at the very least, Assange has yet to hit the bottom of his vanity. Yet the shock is not that Assange would feel comfortable enough to do this, but that the media is mostly letting him get away with it, too distracted with the details of his actual day job (leaking confidential files) to ridicule him for something few other media figures would have survived.

In some ways, it has worked. After repeated bashings for looking like a Bond villain back in the “Collateral Murder” days, Assange cut and dyed his hair (moving eulogy to the silver mane here) and started wearing suits for a change. The very least it got him was his very own fanpage, where giddy fangirls (and boys) fawn over him and lament they were not the objects of his rape charges (really). Degrading, perhaps, but it’s all a walking PR disaster the size of former BP CEO Tony Hayward can do to keep the public in his favor. Those who perceive a gender bias in the way media figures must present themselves should take some solace in the fact that sex is now a tool for both genders– or, at the very least, Assange is desperately trying to make that so. In the aforementioned Megyn Kelly case, those who supported her choice to look sexy in a skimpy dress without a hint of irony found it empowering. Somehow, Assange’s version of a skimpy outfit and sexy look devoid of irony– engenders more pause. The personalities and histories, of course, are different, whether there is something equally empowering or degrading about a man taking to what has traditionally been a woman’s battlefield to save his image has now become a matter of contention where, previously, the physical exploitation of a male figure was only possible for the sake of comedy.

Had it been any other website proprietor, it would have been ridiculous enough– imagine a new Drudge Report with Matt Drudge‘s bedroom eyes baring down from above, or Big Government with Andrew Breitbart pinups all over the place, or a Daily Caller with something like this wallpapered everywhere. Because these are all men, it would be quite funny; one suspects Arianna Huffington would not get away with being “funny,” but rather would be accused in a rainbow of euphemisms of prostituting her image for money. That Julian Assange is now doing the same– when he faces an international sex crime charge, no less– is a gutsy, bizarre, disarming, insane move worthy of universal mockery– or universal recognition.