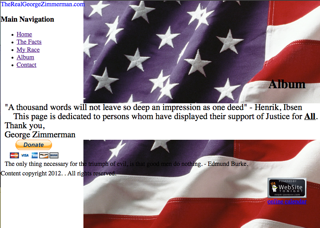 George Zimmerman, the man who shot Florida teenager Trayvon Martin, is finally breaking his silence. The website “TheRealGeorgeZimmerman.com” went live today with what alleged to be a personal statement from Zimmerman and a request for donations to pay his lawyers. The website appears to be incomplete, however, as it only a few minute ago acquired an American flag background and boasts links titled “My Race” and “The Facts” that don’t work.

The home page, formerly a simple white, now an American flag, has a Paypal link and a message from Zimmerman:

I am the real George Zimmerman,

On Sunday February 26th, I was involved in a life altering event which led me to become the subject of intense media coverage. As a result of the incident and subsequent media coverage, I have been forced to leave my home, my school, my employer, my family and ultimately, my entire life. This website’s sole purpose is to ensure my supporters they are receiving my full attention without any intermediaries.

It has come to my attention that some persons and/or entities have been collecting funds, thinly veiled as my “Defense Fund” or “Legal Fund”. I cannot attest to the validity of these other websites as I have not received any funds collected, intended to support my family and I through this trying, tragic time.

I have created a Paypal account solely linked on this website as I would like to provide an avenue to thank my supporters personally and ensure that any funds provided are used only for living expenses and legal defense, in lieu of my forced inability to maintain employment. I will also personally, maintain accountability of all funds received. I reassure you, every donation is appreciated.

The last words on the page are a quote from Edmund Burke: “The only thing necessary for the triumph of evil, is that good men do nothing.” The other links seem to barely work; after a few attempts at refreshing the page, the link labeled “My Race” leads only to a quote from Thomas Paine: “”The world is my country, all mankind are my brethren, and to do good is my religion.” The one labeled “Album” has a photo that simply says “Justice for Zimmerman,” though ThinkProgress reports it previously included a photo of the words graffittied onto a brick wall– the vandalization of a black cultural center at Ohio State University.

NBC News confirmed with Zimmerman’s attorneys that the site is indeed his, but it is still unclear who is in charge of web development or screening what goes on the site. It was announced today that no Grand Jury investigation would come in the Martin case. CNN’s Brooke Baldwin also confirmed the website was, in fact, Zimmerman’s, while filling in on Erin Burnett Outfront today.