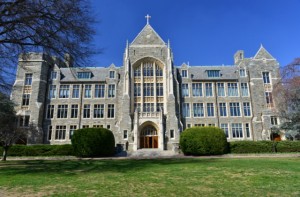 My parents met and graduated from Georgetown University. I am the first of four siblings who graduated from there. My father was the head of the search committee which chose the current president of the university, Jack DeGioia. For the last several years, I have been an alumni interviewer in the admissions process, but thanks to today’s news-making announcement regarding slavery “reparations,” I will no longer be serving in that role.

Georgetown has decided, based on a report commissioned after a meager number of people protested last year during the start of the “Black Lives Matter” craze, that it will be taking several measures to make amends for our school’s past sins in the realm of slavery. Included among them will be preferential treatment for the descendants of slaves which Georgetown owned in the early 1800s. Georgetown will also be renaming buildings previously honoring the past school leaders who sold slaves in 1838 (in order to save the school from near certain financial demise). The newly honored will be one of those slaves as well as a black educator.

In the highly politically-correct world of modern academia I am quite sure that the only controversy that these and other similar actions will create at Georgetown is that they don’t go quite far enough to placate the racial grievance industry. Those forces apparently wanted the slave descendants to get direct scholarships in addition to preferential admission to one of the most competitive colleges in the country.

My objection to all of this is two-fold. It is based in the revising of history and creation of a very dangerous precedent which will likely lead us all down a very slippery slope.

First, the idea that two people who effectively saved the university by participating in a perfectly legal slave sale back during a very different time period can just be “erased” is Orwellian at its core. While the act is obviously repugnant by today’s standards, there is no allegation that these two men did anything considered to be wrong at the time, and there is a very good chance the university would not even exist today if they had not made the decision that they did. It is also very odd to me that somehow it was the sale of these slaves which is now seen as so objectionable. Are we to conclude that if these unfortunate people had simply remained enslaved by Georgetown that this somehow would have been better and no one would be punished almost 200 years later?

Then there is the issue of how descendants at least seven or eight generations removed from Georgetown’s actions could possibly have suffered enough personal damage done by the sale as to warrant them being given near certain admission to the university. There is also, of course, the matter of how in the world such people (there must be many thousands of them by now, depending on the definitions used) could be, even theoretically, credibly identified.

Quite simply, one would have to live in the Ivory Tower of liberal academia to believe that any of that is remotely logical or even plausible. Whatever happened to the simple concept of “two wrongs don’t make a right”?

The bigger question here is regarding where, if at all, this type of action ever ends. Once this precedent is set (thankfully, Georgetown being a “private” school, the impact will likely take a while to become widespread) it is difficult to see how it ever stops, especially with the news media so completely in the tank for anything which remotely “feels” right in the highly-PC realm of race.

Specifically, based on our actions of today, I wonder how in the world we Hoyas can possibly still cling to our school colors of blue and gray. You see those colors have a very real and rich history which directly relates to Georgetown’s unique role the Civil War. Effectively, our gray is a way of honoring our students who went to fight for the Confederacy. I can’t wait to see how fast our administration folds once a “Black Lives Matter” protestor, seeing blood in the water, decides to finally make an issue out of that. I’m guessing our sports teams would be dressed in all black by the end of the week.

The part of all of this which is most disturbing to me is that I am quite confident that there were very limited voices involved in this decision-making process who didn’t possess an overtly very liberal worldview (and, if there was, I’m even more confident that they were afraid to speak out). I know our president (with whom I have interacted often) is very liberal and the entire culture of academia is literally rigged in that direction.

Similarly, this piece is very likely to be the only one written in the media, or within Georgetown itself, expressing a dissenting opinion. There is simply no diversity of thought when it comes to academia, and that is exactly how such absurd, short-sighted, feelings-based, and dangerous decisions like this one get made.

I will miss interviewing prospective Georgetown students, but I can no longer rationalize being part of a process which thinks so little of the principles in which people like me believe.