German Satellite ROSAT Expected To Hit Earth This Weekend; You Can Track Its Path Online 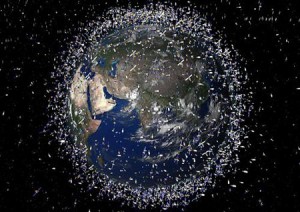 If it seems like old satellites are falling to earth every month… it’s because they are. Back in September, NASA’s dead Upper Atmosphere Research Satellite (UARS), burned up as it re-entered our atmosphere, with leftover debris hitting the Pacific Ocean, southwest of Vancouver. Now comes word that Germany’s ROSAT satellite — also dead — will be heading back to earth at some point this weekend. And making this re-entry just as much fun is the German Aerospace Center’s total inability to predict where it might land. The good news is that someone getting hurt by satellite fragments is pretty low. According to their website:

The likelihood of a person getting injured as a result of the re-entry is extremely low.

Taking account of the projected total surface area over which damage might be caused by the fragments that – theoretically – might survive re-entry, the orbital path of the satellite and the distribution of human populations on Earth, it is possible to calculate that the probability of someone somewhere on Earth getting injured is about 1 in 2,000; that is, one person is predicted to be injured for every 2000 de-orbit events of this kind. The probability of someone in Germany being harmed is much lower: about one injury for every 700,000 de-orbit events.

One of the cooler aspects of ROSAT’s re-entry is the ability to watch its orbit over a Google map (for a truly mind-blowing experience, try watching the satellite path over a satellite layout of the map). But even obsessive watching won’t help determine the landing spot; most scientists say that an exact location probably won’t be known before ROSAT hits.