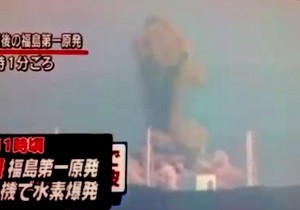 The aftermath of Friday’s massive earthquake in Japan has led to what may even be an even larger worry. The Fukushima Nuclear Power Plant in eastern Japan has been out of control since the quake hit, emitting 1,000 times the normal level of radiation and threatening to melt down completely. An explosion rocked the debilitated plant yesterday, raising concerns of a possible meltdown. Now video of a second explosion at the power plant has hit the Internet, and while its uncertain the scale of disaster at this point, this can’t be good news.

Asia’s largest utility is seeking to avoid a meltdown of at least two reactors at the nuclear power station by flooding them with water and boric acid to eliminate the potential for a catastrophic release of radiation into the atmosphere. The station lost power to keep the reactor core cool after the March 11 earthquake, the largest ever recorded in Japan.

Watch the video of the explosion below: