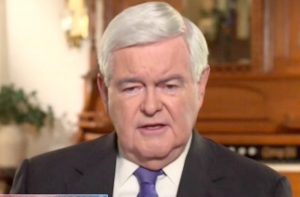 Former House Speaker Newt Gingrich suggested on Monday that Congress should consider changing government ethics for Donald Trump‘s imminent presidency, or else, the mogul might be quick to indulge in his power to pardon.

Gingrich appeared on The Diane Rehm Show yesterday and said that people shouldn’t be surprised or alarmed by the conflict of interest concerns regarding Trump’s business interests and his family being involved in his transition team. Gingrich said that it was impossible for Trump to completely detach himself from the large scope of his empire, and that his adult children are his children, even if they also act as his business partners.

Gingrich said that “a whole new approach” will be necessary for nepotism and ethics laws, and that Trump could use presidential pardons for anyone in his administration who presents a complication:

“In the case of the president, [Trump] has a broad ability to organize the White House the way he wants to. He also has, frankly, the power of the pardon. I mean, it is a totally open power, and he could simply say, ‘Look, I want them to be my advisers, I pardon them if anybody finds them to have behaved against the rules, period.’ And technically, under the Constitution, he has that level of authority.”

Rehm asked Gingrich about whether that level of authority would be better off in Congress than the White House. Gingrich conceded that government corruption was a challenge to be faced, though he said that Congress can address Trump’s unconventional position through hearings and other examinations.

Trump was meant to give an announcement regarding his business detachment and his potential conflicts, but he abruptly cancelled it earlier this month.

Listen above, via WAMU-FM.