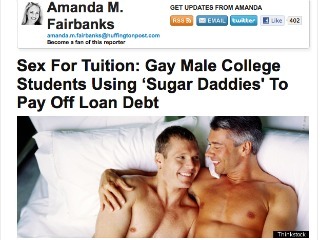 GLAAD is calling on the Huffington Post to apologize for an article in which writer Amanda Fairbanks chronicles “Sex For Tuition: Gay Male College Students Using ‘Sugar Daddies’ To Pay Off Loan Debt.”

In a blog post about the article, GLAAD lists the various gay stereotypes and misconceptions that appear in Fairbank’s report. For example, she quotes a student who tells her that students participating in prostitution do so in order to “afford the extravagant and often lavish gay lifestyle” and writes that “unlike in the straight world, many say they find working as an escort on the gay scene to be an accepted, even applauded practice.”

As GLAAD sees it, phrases like “gay culture” and “gay scene” have no place in a piece of serious, socially conscious reporting:

These are not phrases that should appear in any piece of responsible journalism (that’s not debunking them as myths) let alone one published by an outlet that frequently publishes positive and affirming stories about the true diversity of the LGBT community. But this article doesn’t stop at just presenting the “gay scene” as a single-minded monolith – it also claims that this gay monolith supports prostitution.

Let us be clear.

The Huffington Post offered a response and explanation of the article that GLAAD has called “inadequate:”

Our coverage of students who sell themselves to manage their college debt has aimed to be sympathetic to their plight — not sensationalistic. But based on our reporting, we found that young women and young gays are part of communities that often view the matter differently. We found that for many gay men, the use of escort services and the exchange of money for sex appear to carry less of a stigma, according to extensive interviews with gay escorts and members of the gay community.

While the Huffington Post’s explanation is, to us, reasonable — this was an article based on the actions and reactions of a small sampling that happens to reinforce a pervasive and fairly negative gay stereotype — we understand GLAAD’s disappointment and frustration. Terms like “gay community” and “gay scene” often work bolster the idea that all or even most gay individuals act or think in one set, particular way. It would be ludicrous to suggest that all straight people rally around the same causes or enjoy the same activities or have the same goals or political beliefs. While it may be true that some gay (and/or straight female) college students engage in prostitution to fuel a life where partying, material possessions, sex and youth are highly valued, it would be absurd — and irresponsible — to suggest that is the unavoidable symptom of belonging to some secret, rainbow-shrouded society known as “The Gay Community.” Are there pockets of gay young people who act like this, and who accept and encourage this behavior in other young gay people? Of course. Are there historical and socio-political factors that play into this behavior? Maybe! That’d he an interesting theory to study. But does being gay automatically equate to being promiscuous, devaluing love in favor of lust, or being hopelessly materialistic? Of course not.

What’s your take, though? Should the HuffPost article have been worded or executed differently? Is it an example of lax journalism? Is GLAAD compeltely off the mark here? And where are these college kids’ parents?!