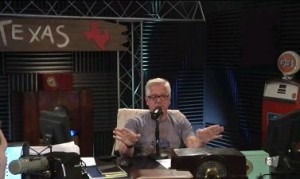 Glenn Beck has made a name for himself as a small government conservative, but that hasn’t exempted him from being a target of fans of Rep. Ron Paul. On his radio show this weekend, Beck debated caller “Tom,” a Ron Paul fan who was outraged by Beck’s support of Israel and accused him of taking “your 30 pieces of silver for Israel over America.”

RELATED: Eric Bolling: ‘What Percentage Of The Vote Would Ron Paul Get… If He Wasn’t For Legalizing Pot?’

Tom (in Florida), identified himself as a Ron Paul supporter and told Beck that he “definitely believed your interest in America is put after Israel… and you operate on behalf of Israel, and not America.” “I am an operative for Israel?” Beck asks, by way of clarification. The caller responds, “I believe you took your 30 pieces of silver for Israel over America.” Beck tried to get a clearer answer– whether he was an operative on the Israeli government’s payroll or merely a fan, but Tom responded that he was part of the “Israeli lobby” and asked, “what is your major problem with Ron Paul other than he don’t [sic] support Israel, he don’t support foreign aid?” Beck laughed off the idea that foreign policy was a small matter, asking Tom: “What’s your problem with Mitt Romney, other than he’s a big government guy?”

To help clarify Beck’s problem with Rep. Paul, co-host Pat Gray played a clip of Rep. Paul talking about “the gentleman” Osama Bin Laden‘s motivations for terrorism being caused by the United States. This devolved into an argument about America (in Tom’s words) “becoming the Soviet Union” in the 1990s and Beck and company mocking him when he could not prove he was not being paid by Ron Paul, and got the caller on the record as denying that either Bin Laden or Ahmadinejad were crazy.

“This guy’s crazy, I believe uneducated, a conspiracy theorist, and a bigot,” Beck later said, concluding that said allies like these did not help Rep. Paul’s cause.

The clip via GBTV below: