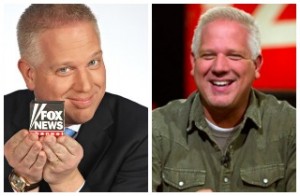 Glenn Beck accepted his Disruptive Innovation Award from the Tribeca Film Festival today in New York City and while he was at it shared some insight into his past life as a cable news anchor. During a live interview at the NYU Stern School of Business, Beck revealed why he really left Fox News and reminisced about his time spent at CNN.

“If you stay in it too long, you become Norma Desmond,” Beck said, according to Forbes‘ Jeff Bercovici. “I remember feeling, ‘If you do not leave now, you won’t leave with your soul intact.’”

While there was much speculation at the time suggesting that Beck was fired from Fox, he indicated today that Fox News chairman Roger Ailes actually urged him to stay. “At the end, when we were leaving, it was a long process,” Beck said. “Roger said to me, ‘You’re not going to leave.’ And I said, ‘I am.’ And he said, ‘Nobody does,’ meaning leave television….And I said, ‘I’m fortunate because I haven’t been in it that long.’ I knew what this big, huge Fox empire brought to the table, and I had to leave before I became too enamored of that.”

When the interviewer asked Beck what he would do to make cable news better, he replied, “I don’t know because I haven’t seriously thought about it, except that I’d fire a lot of people. A lot of people.”

Beck has been running the online television network TheBlaze TV on a subscription model full-time since he left Fox News in June 2011. A little over one year later, it was estimated that the site had over 300,000 paid subscribers and had struck a deal to be shown on the Dish Network.

“Glenn Beck wasn’t trying to save his soul, he was trying to save his ass. Advertisers fled his show and even Glenn knows what that means in our industry. Yet, we still tried to give him a soft landing. Guess no good deed goes unpunished.”