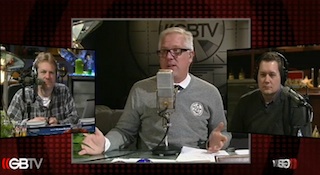 Today on his radio show, Glenn Beck jumped into the scandal surrounding a tweet sent out by CNN’s Roland Martin during the Super Bowl. Martin tweeted that anyone who was “excited” by David Beckham’s underwear ad should have the “ish” smacked out of them, leading to GLAAD calling for his firing for what they perceived as an anti-gay attack. Beck explained that Martin should be fired, but not for his tweet. Rather, because he’s a “dope” and an “idiot.”

Martin has since argued that his tweets were actually insulting soccer, a claim Beck mocked. However, Beck said he had no idea whether or not Martin was actually a homophobe. However, he seemed to be very sure in his feelings on the CNN contributor’s intelligence.

“GLAAD, you should have been on this bandwagon a long time ago. There is a myriad of reasons for getting him fired from CNN. He is an idiot. I have to stand with him, unfortunately, and say that you don’t fire people for what they say in their personal life or what they believe. You fire them because they’re idiots.”

It should be noted that this was clearly not an objective assessment from Beck. He explained that he used to work with Martin during his time at CNN and alleged that the man had told more lies about him over the years than he can count. Like his response to Anthony Weiner’s misfortunes, Beck was obviously enjoying his time watching someone he thought had slighted him get in trouble. At one point, he joked that, if there should be anyone out there being homophobic, it’s a good thing it’s someone in an ascot.

Watch the clip from GBTV below. At the end, Beck also joins Bill O’Reilly in defending Ellen DeGeneres from anti-gay protesters.