Beck Warns Syrian Cannibalism A Sign Of ‘Biblical’ End-Times: ‘We Are At A Different DEFCON Level’
video

Beck Warns Syrian Cannibalism A Sign Of ‘Biblical’ End-Times: ‘We Are At A Different DEFCON Level’ 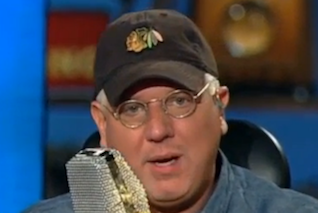 Glenn Beck prophesied on his radio show Friday that the incident of a Syrian rebel eating a slain man’s heart—which has gone viral in one of the most NSFW videos ever—was an occurrence of a Mormon prophecy signaling the end times.

“At the very end, one of the last books, it talks about how the enemies that they were up against at that time were into cannibalism and they were eating people as a sing of bravery and courage,” Beck continued. “When I saw the video of a soldier in the groups that we are arming, stand on a battlefield and cut the chest open, and take the heart, a beating heart out of a dead body, and eat it and use it as courage, I thought to myself: ‘I know this calendar, I’ve seen this movie before. We are in very dangerous times. We are living in biblical times.'” (Though the Book of Mormon and the Bible are separated by a couple of millennia.)

“I told my staff a long time ago,” Beck said, “when you hear me talk about god, you will know we are at a different DEFCON level. Because I know what it does to my popularity. I know it turns you into a crazy Christian kook…If you ever hear me mention the Book of Mormon on the air, we are at the end.”

“I feel that we are now at the place to where you had better have your house in order,” Beck finished.

Listen to the clip here: