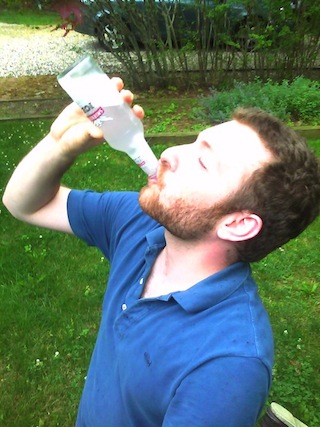 You see this awful picture here? This is a picture taken by (I think) Frances Martel of me getting “Iced” by Rachel Sklar at a Mediaite summer beach trip. Weird, huh? Remember when Icing was a thing? God, I’ve been here for a while.

And, I’m sorry to say, that time has come to an end.

For those that don’t know (everyone?), I was hired at Mediaite in the early spring of 2010 to be a Marketing Intern. However, someone left the day before I started and I was asked to write content 50% of the time. This was good as, despite what I told Colby in my interview, I knew absolutely jack all about marketing (I’m pretty sure I had just quoted Don Draper and pretended it was something I made up). Within a few months, I was an editor and have been posting brilliant musings on truly important news stories ever since.

Really though, I’ve mostly just been dicking around. I mean, have you read the stuff I wrote?

I wasn’t here for the beginning of Mediaite. I started a few months after the site’s creation, when the staff had moved out of their first headquarters (Dan Abrams’ rec room) and into their second headquarters (a few empty tables in the back of record label’s office). I remember those days. I remember how we’d be trying to write about the Blago trial or something when, suddenly, huge plumes of weed smoke drifted out of the recording studio we were crammed against. Weed, I must add, that we were never invited to partake in.

We were, however, invited to a Cyndi Lauper album release party once so that was cool. I mean, I didn’t get to go to it, but I imagine it would have been cool.

I remember when we finally got our own office. I even remember going to Ikea to look at chair choices (I bought a giant Swedish chocolate bar and pretended to be interested in chair choices). And I definitely remember when a wall was knocked down and this office of ours doubled in size.

I have a lot of memories from this place. Some of them are incredible like the time I got a phone call that informed me I would be going on national TV to discuss Snooki (?) in two hours. Having never gone on TV before (or since, to be honest), I rushed to the Time Warner building as fast as I can (wearing my roommate’s tie since I didn’t have a nice one myself). I was terrified. Everything about it was intimidating. A woman who was both gorgeous and a foot taller than me (!) led me into a tiny room which featured nothing but a table and a giant camera. The woman sat me down, stuck a microphone in my ear, and told me that there was a monitor below the camera which showed what was on TV but which I could never actually look at because it was a second behind so then my reactions would be two seconds behind. Basically, this is like telling a person you’ve placed a poisoned cake in front of them just for shits and giggles. Xena the Warrior Production Assistant then left and I was alone in the room for about 15 minutes. Then the segment started.

Let me tell you one thing I learned that day; the moment when an anchor is giving your introduction and you just have to smile blankly into the camera for what feels like an eternity is one of the most uncomfortable moments a person can go through. It’s like those instrumental breaks that go on too long when you’re doing karaoke only now there are tons of people watching you. It’s the worst.

No, wait. The worst is when your ear piece falls out in the middle of the segment and its literally the only connection you have since the anchorwoman is in another state and you’re not allowed to look at the stupid monitor for some reason. That’s the worst.

So that was a pretty incredible memory. And there also weird memories like all of the times famous people went on radio or TV to talk about how much of an asshole I am. I had Andrew Breitbart call me “a punk” a few weeks before he passed as well as the one day in which Rush Limbaugh ripped me to shreds in the morning while Keith Olbermann put me on his World’s Worst list in the evening.

It’s weird. Over the years, my friends have never been able to even pronounce the name “Mediaite,” but they’ve always loved to hear “famous person hates Jon” stories. People find those really interesting. In fact, don’t tell my girlfriend this but it’s almost a shame we’ve been together the entire time I’ve worked here. I never got to test and see if “Keith Olbermann thinks I’m one of the worst people in the world” is a pickup line that can get you laid at a bar.

And, of course, some are bad memories like…well…like basically the memory of watching every single thing I had to cover while here. Seriously, cable news, Jesus Christ. I have to assume that there was a time, at some point in human history, where Americans preferred their news to actually be a presentation of facts rather than a cushiony blanket of “interpretation” designed purely to confirm what the uninformed viewer actually thinks while protecting corporate overlords from any and all bad press.

Whatever. I’m never going to watch cable news again. Except for the day after Obama wins. Then I’m gonna watch Fox News for 24 hours straight. Any guesses on who’s gonna cry?

But, despite having my belief in journalism downgraded from “These people speak truth to power” to “On the upside, Erin Burnett is pretty” over the course of a few short years (not to mention the countless columns I had to write, fruitlessly explaining to educated adults that, hey, restricting the rights of a minority group for no reason isn’t really an American thing to do), I would count this as a positive experience.

And that has everything to do with the wonderful people I worked with.

From the day I interviewed for this job with Colby, Andrew, and Robert, everyone here has been incredible. From that batch of interns I worked with on my first day (Frances, Dan, and Glenn), to the amazing Mediaite staff I’m leaving behind (Alex, Meenal, Tommy, Noah, Josh, Andrew, and Jon on the phone), this has been one of the greatest groups of people around. And that includes every Mediaite writer who left before me (Steve, Glynnis, Rachel, James, Nando, Mark, so many more), all of our great interns, the writers of all the other sites, Sarah and the wonderful office managers, the sales team, the tech people, the big guy, Dan, and basically everyone who’s walked through any of the doors that we called our own.

That includes Cyndi Lauper! I didn’t go to your party, Cyndi, but I’ll always love “Time After Time”!

And, of course, the readers. What can I say about the readers. I mean, I probably shouldn’t say anything since past experience predicts that most of you only read my headline and immediately jumped to the comments to tell me how wrong I am. However, for those of you who stuck around, let me say that it’s really been a blessing. Seriously. There are some bad apples in there but mostly I’ve gotten the privilege of writing to one of the most passionate and energized batches of people ever, people who debate because they truly care. I just wish they didn’t care so much about cable news. You guys know that stuff sucks, right?

But I’ll miss you wacky people. I’ll miss you a bunch. So farewell. If you ever miss me too, feel free to follow my Twitterz or my TumbleTums or my BingleBangle or whatever other social media thing is going on. Or just go through my author back catalog here, preferably while listening to Harry Nilsson’s “Without You” on repeat.

Final thought: For those of you who’ve always wondered how to make your Labor Day weekend last longer, I think I’ve figured out the perfect way!