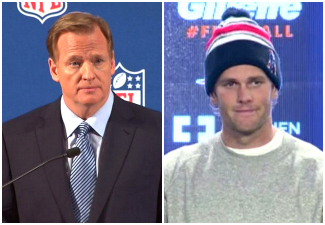 To say Roger Goodell went way went overboard with Tom Brady’s four-game suspension is one of the greater understatements ever made about any punishment in any sport. And to say TV partners CBS and NBC are just a wee-bit upset about the decision is as big an understatement…but more on that in a moment.

Let’s be clear about the suspension first: This wasn’t just about Brady having at least “general knowledge” of the relatively benign crime of deflating footballs a bit. This is about Goodell getting played the way he was when the Pats found a loophole in running a legal (now illegal) formation with running backs posing as tackles and ending up being (uncovered) eligible receivers instead to help fuel a comeback win against the Ravens in the divisional playoffs the week prior to Deflategate vs. the Colts. This is also about Coach Bill Belichick not exactly being forthright about his injury reports since taking over in New England over 15 years ago.

But most of all, this is about looking soft when it came to Ray Rice’s punishment after knocking out his fiancee on video in an Atlantic City elevator. It’s about Goodell suddenly coming under the kind of negative scrutiny usually reserved for the Bud Seligs (baseball/steroids) and David Sterns (NBA/referees gambling/fixing) of the world. Ultimately, he had to reassert himself as the Sheriff of pro sports again. And if he could screw the 21st-Century-version of the evil 1970s Oakland Raiders by taking away its All-World QB for one quarter of the season in the process…well…that’s even sweeter.

The television partners will likely making their feelings known. NBC now loses its marque attraction on opening night to kick off the season (Steelers-Pats), while CBS essentially loses what would have been one of the highest-rated Week 5 matchups (following the Pats’ bye week) ever in a nationally-televised late Sunday matchup (Patriots at Cowboys, Brady-Romo). Well, at least Pats-Colts in Week 6 when Brady returns will be the most hyped (and most watched) October game ever (although the bet here is the suspension gets knocked down a game after appeal).

We keep hearing the world cheater bandied about when it comes to Brady…as if he’s somehow another Lance Armstrong or Alex Rodriguez. You’re kidding, right? Performance enhancers provide a definitive competitive advantage. Warning track outs become home runs. Stamina issues become less of a factor in the French Alps. But deflating a ball a little bit? If Brady was gaining such an advantage, how exactly did he throw four touchdowns in the second half against the Colts after the game balls were inflated to the proper level? And how did he orchestrate that incredible comeback against the vaunted Seattle defense in the 4th quarter of the Super Bowl? Besides having a more comfortable feel to the quarterback, what exactly was Brady gaining?

Finally, consider this: Rules and laws in society have generally set consequences: If you run a red light and get caught, there’s a certain amount of points added to one’s license, for example. But in the NFL, it administers punishment using the make-it-up-as-we-go-along approach. If there’s a rule around what the weight of each ball should be, why isn’t there a written, set consequence around ball manipulation? Create the rule, create the punishment. Otherwise, it all looks so arbitrary.

Tom Brady gets four games. The Pats lose a first rounder and cool million. We don’t know how the QB orchestrated the scheme or if he’s even definitively guilty.

Evidence? Precedence? Who needs it?

Or maybe this about the Pats getting their just desserts for flaunting the league’s conventions for so long.

Overboard punishment. Overzealous analysis. Sheriff Goodell is back in town. Tom Brady needed to be used as an example.