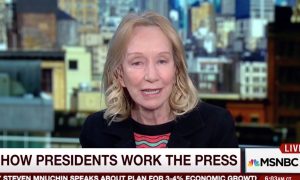 Presidential historian and highly-decorated author Doris Kearns Goodwin appeared on Morning Joe Thursday to shed some light on the ways in which various Presidents in American history have blown off steam through correspondences with their rivals.

For instance, Goodwin highlighted, Abraham Lincoln “had a great ritual,” whenever he got angry, opting to write what was known as a “hot letter.” Goodwin said, “All of his anger would come out in the hot letter, and then he would put the hot letter aside, hope he would cool down, and then never need to send it.” Franklin Delano Roosevelt would routinely write multiple drafts of angrier rhetoric into speeches before toning them down.

The Team of Rivals author even revealed that during a conversation with President Barack Obama, 44 himself admitted to a similar exercise to ensure that his purest and rawest thoughts weren’t necessarily communicated. Goodwin wondered if there might be a historical precedent of some sort for President-elect Donald Trump to learn from as well.

“Maybe we have some sort of a model here for Mr. Trump, if he has a fake Twitter account that he can just read it in his own office and then just crumple it up and throw it away,” she offered jokingly.

Host Joe Scarborough remarked that therein lies the issue: Trump is our “first social media President,” and with it a whole new host of challenges. “That actually does cause a problem,” he continued.

“There’s got to be some governing principle that works out, because I don’t think it’s going to be too easy to be a governing President sending Tweets in the middle of the night,” Goodwin concluded.